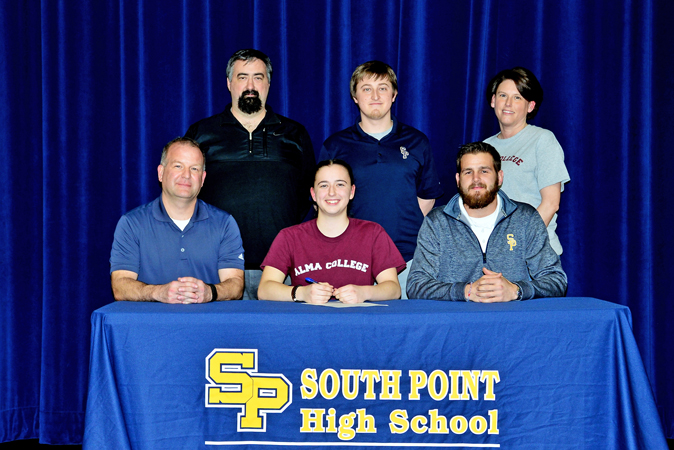 SOUTH POINT —Having played soccer for the past decade, Camera Stevens didn’t want to stop playing just yet.
But her question was, “Am I good enough?”
That question was answered emphatically on Tuesday when the South Point Lady Pointers’ senior soccer standout signed with the Alma College Scots.
“I always wanted to do it and then I went to the next level with travel (and players and coaches) were like, ‘Oh, you’re capable of doing it’ so that pushed me more to try for the next level,” said Stevens.
Stevens plans to major in chemistry and enter bio-chemistry or chemistry with medical side. The education aspect was the only real factor in her decision.

Stevens said she really didn’t consider others schools once she was introduced to the Alma, Michigan, college.
“(Other schools) didn’t provide me with what I wanted and they didn’t feel like home,” she said.
“I like the way I fit in. You’re not just another person. You’re like family. They care for you and not just what you want to do. They don’t care about their money. They just want you to succeed.”
Stevens will play defender for the Scots, quite a change from high school.
“In high school they had me all over the place. In travel season I was strictly a defender,” said Stevens.
Playing at the high school and travel level exposed Stevens to a higher level of talent. After visiting Alma College and watching some games, she knows the talent goes up another notch.
“They placed second in their division last year and I got to watch them and they were pretty good,” said Stevens.
“I was not capable of spending the night and being one-on-one with them, but I had more time talking with the coaches each time I went up and each time I got closer with them.”
While Stevens knows the talent rises at the next level, she has set goals and won’t back down from the challenge.
“Right now my goal is to just progress more and travel. I want to see different places. I think they’re going to be capable of giving me that,” said Stevens.
“I was kind of frightened by (the talent level). I’m going to be playing with these girls and they have one up on me. I’ve got to match them somehow.”
Camera is the daughter of Margie Henry and Robert Stevens.