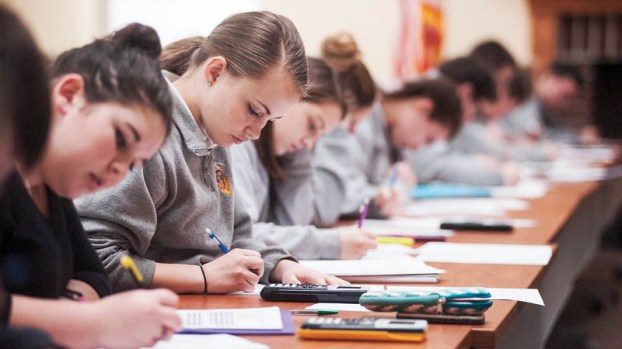 Students from St. Joseph High School take part in ACT prep week, offered at Ironton High School, to assist them for when they take the college admission test.

Prepping for the ACT

For college-bound high school students, there is a boogeyman of a test that weighs upon their mind– the ACT.

But at Ironton High School, they are getting students ready for the ACT by having students who have already taken the test help others.

The test is one of the factors admissions officers look to when determining who gets into college.

Dylan Herrmann-Holt is one of four seniors running the review. They were selected since they had high scores; Herrmann-Holt got a 32, Mason Slagel got a 34, Jake Isaac got a 31 and

Mitchell Weisberger got a 27. The average composite score in the U.S. is 21. The highest score possible is 36.

For a week, they spend 45 minutes a day diving into a different section of the test.

“We talk about different tips that will help you get through the test and then cover content, important things you need to know,” Herrmann-Holt said.

The subjects covered include overviews of English, math, reading, science and an optional writing section.

The ACT prep classes have been led by students for the past four years. The students talked to teachers to get guides that covered the various subjects and then condensed it down to fit the 45-minute class period.

“This is student-founded and student-lead,” Mason Slagel said. “I think it helps because sometimes people learn better from their peers, or at least in a different way.”

“We opened it up to other schools this year, so St. Joe sent 25 people,” Herrmann-Holt said.

Normally, the class is taken only by juniors and seniors, but, this year, they opened it up to anybody who wants to take the test.

“It’s my personal opinion that you should take it before your junior year, so you can get a feel for it,” Herrmann-Holt said.

Mason Slagel said this session has been the biggest one they’ve had.

“It’s really cool,” he said. “I think more than anything, this is a confidence builder. If you convince yourself you’re going to go in and kill on the test, you are going to.”

Herrmann-Holt said the hardest thing about the ACT is that it is trying to scare you.

“You have to get there early, you sit around and you’re not allowed to talk. It’s a four-hour test, clocks are taken out of the room,” he said. “They try to make it as scary environment, I feel. I think one the biggest attempts of ACT week is to get rid of the fear. Once you’re not scared of the test, you can put your knowledge out there.”

The tips include knowing your calculator and dressing up to give yourself confidence. Students are told how long each section of the test takes so they can go home and time themselves while doing a practice test.

“It’s all things we’ve learned while taking the test,” he said.

Herrmann-Holt said it’s really about not being scared by the test.

Herrmann-Holt said they have gotten a lot of positive feedback.

“After our first round we had people go up two or three points,” he said. “Which is really nice.”

Slagel said they hope everyone raises their scores up after taking the class.

“Most of all, I hope they learn something,” he said. “A lot of kids go into this and have test anxiety. I think by practicing a little bit, it becomes second nature to them.

He said he took the test “way too many times — like seven or eight times.”

But he said each time he took the test, he got less anxious about it.

He took the ACT for the first time when he was just “a scared little freshman. I didn’t even have photo ID, I had to use my passport.”