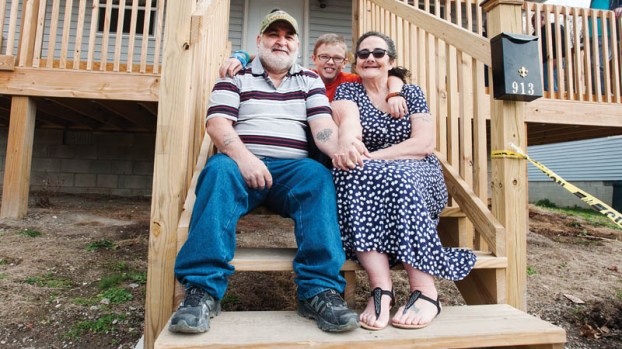 nald and Sally Richendollar, sit with their grandson Markus, outside their new home at 913 South Tenth Street in Ironton. The home was sponsored through Habitat for Humanity.

A project that began last August saw completion today with the dedication of Don and Sally Richendollar’s new home in Ironton.
The home, in the 900 block of Tenth Street, was built from the ground up completely with volunteer labor — over 1,000 hours of it. It’s the 36th home constructed with the assistance of the Ashland-Ironton area Habitat for Humanity, explained local Habitat president Lew Dunn.
There is a real need in the area for good housing, Dunn explained. For every house like the one built for the Richendollar’s, he said they have another 50 apply for the process.
“For each application, probably two out of 100 are approved,” Dunn said.
He explained that a number of criteria go into choosing a family that can benefit from a Habitat home. One of those is their ability to keep up with the home after it is built.
“They’ll have to pay for (the home) over 20 years,” Dunn said. However all of the labor is donated volunteer work. That helps keep a lot of the costs down. Habitat also carries the financing for the families who are approved, so there is no interest rate eating up payments.
New homeowner Don Richendollar explained that he and his wife knew Laura Brown, who is on the Habitat for Humanity board, and that she encouraged them to apply. Once that was approved, he explained, they got started digging the footers and getting the grounds ready.
Don was involved in all aspects of building the house except laying the block and putting the shingles on the roof, he explained, but said he couldn’t have ever done it himself without the help and support of the Habitat volunteers, including his son-in-law, co-workers, construction manager Herb Brown and Dunn. In fact, Don presented Dunn a plaque and dedicated the new home to the Habitat president.
It’s the first new home for the Richendollars and their grandson, Markus, and they are excited to be in the bigger space.
“It’s a dream come true,” Don Richendollar said.
Sally added that with their grandson living with them, and other grandchildren visiting, the extra space compared to their last place was going to be really helpful.
“It took a lot of time, a lot of dedication,” Sally Richendollar said. “And a lot of hard work. A lot of hard work.”
“There were times we thought we weren’t going to get in due to all the time we had to put in. (But) it’s a blessing,” she continued, her voice cracking with emotion, “a true blessing.”
She said that she would definitely encourage others to donate their time and energy to volunteering with Habitat, and that she and Don will continue to donate their time to the organization that helped put them in their new home.
“This is something a lot of people need to understand,” she explained. “This is something that tries to help the community, and you can’t always get help. So it’s something that (we’ll support). Habitat needs a lot of help.”

Funds to help boy with treatment for conditions PROCTORVILLE — A spaghetti dinner is planned for March 11 to help... read more