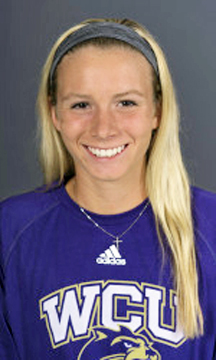 ASHEVILLE, N.C. – For the third time this season a Western Carolina women’s tennis team match was decided by the 4-3 score and for the second time the Catamounts came out on top. WCU outlasted host UNC Asheville Sunday afternoon at the Asheville Racquet Club. Freshman Madison Riley — who played at South Point — improved to a team-leading 4-1 in singles play on the season as she clinched the match at No. 5.

“That was a total team effort today,” said head coach Michaela Kissell-Eddins. “We could not have beat a team like Asheville without everyone showing up ready to fight their hardest. It was huge to win the doubles point and carry that momentum into singles. Our young players are finding out early the beauty of college tennis: that nothing comes easy and each win has to be earned. We definitely earned that one today and we look forward to two more battles next weekend.”

The Catamounts picked up the doubles point as sophomores Savannah Taranto and Alexa Webb won at No. 1 and junior Elizabeth Ansari and Riley took the no. 3 victory. Taranto and Webb downed their No. 1 competition 6-3 while Ansari and Riley cruised to a 6-4 victory. Freshmen Lauren McCall and Jordan Strickland were knotted at 4-4 in the No. 2 doubles match when the competition was halted due to WCU clinching the point.

The Bulldogs cut the Catamount lead to 3-2 as they won at No. 6 which opened the door for Riley to clinch the match at No. 5.

The Catamounts would drop the No. 3 singles match but the 4-3 victory improved WCU’s record to 3-2 on the season.

WCU will now travel to Presbyterian College on Saturday, Feb. 18 to take on the Blue Hose who have won five-straight matches to open the season with a 7-2 record.