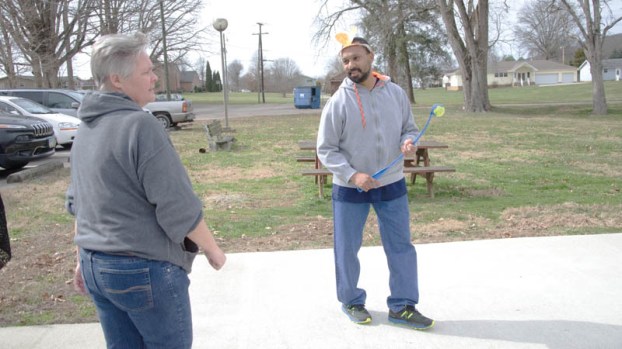 Mark Coleman, prepares to throw a ball to a dog as specialist Ginny Haas looks on.

SYBENE — A center providing services to adults with disabilities has been run by a private, nonprofit group since January.

Easter Seals, a charitable group founded in 1919 with a network of 550 sites in the U.S., took over operations of the Adult Day Center, located in the former Sybene Senior Center near Burlington Elementary on Jan. 4.

Pandora Shaw-Dupras, the CEO of Easter Seals Central and Southeast Ohio, said the site, a spacious, 14,000-square foot building on the Ohio River, was run by the county as an adult activity center for disability needs until Christmas of last year.

“This was here for four or five years,” she said. “When the federal government said the county could no longer provide the services, they asked for providers.”

Shaw-Dupras said the site, a partnership with the Lawrence County Board of Developmental Disabilities, is one of several she has opened in the state during her time on the job.

“We’re an activity center for adults with disabilities,” she said. “We provide social and recreation-based activities.”

She said the changeover took place over the Christmas holiday.

“We absorbed many of the staff who worked for the county, and we have some who are new to the field,” she said.

She said they have assumed clients who used the previous facility, and have begun serving new ones.

The center, which has a staff of 10, currently serves more than 50 clients and hopes to expand before the end of 2017.

Featuring a cafeteria, arts and crafts room, offices, and a basketball court, the facility offers classes and also gives clients the chance to take part in activities such as the Valentine’s Day dance scheduled on Tuesday, or to interact with animals, such as the center’s black labs.

Trips to outside locations, such as a bowling alley or Petland are often organized.

“We have a cooking class, and they go out to shop for supplies and bring them back here,” community services manager Amanda Hamilton said.

Shaw-Dupras said clients are dropped off at the center at about 8 a.m. and take part in activities throughout the day until 3 p.m.

Hamilton said her time on staff at the center has been a positive experience.

“It’s a great opportunity to get to work with people and help them grow in daily tasks,” she said.

The center is planning an open house event for 2-6 p.m. on March 7.

“We’re inviting the community to come out and see what we do,” Shaw-Dupras said.