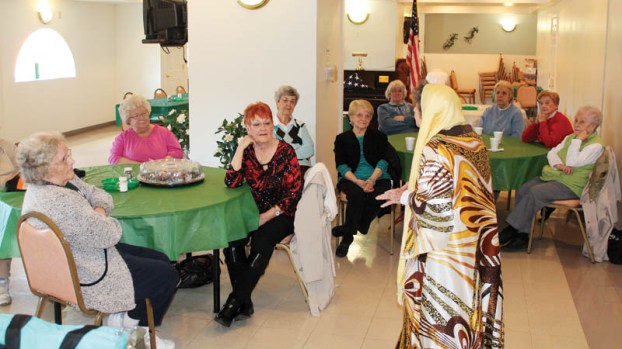 Women of the Ironton Senior Center enjoy a presentation by local historian and author Jean Fuller Butler on Wednesday.

Local historian and author Jean Fuller Butler conducted her monthly presentation at the Ironton Senior Center on Wednesday, portraying Deborah, Judge of Israel, in the Book of Judges in the Old Testament of the Bible.

“This was my first time portraying Deborah here,” Butler said. “She was the only woman judge of Israel, and God called her to be judge. She’s an important person, because not many women are talked about in the Bible.”

Butler, who has portrayed countless women in history, said she enjoys the portrayals of women because she feels that even today, women are not treated as equally as men.

“Even today, we’re like second class citizens, so I like to portray women,” she said. “I’ve portrayed 14 first ladies, a lot of Bible women, famous American women and some queens of England. If someone wants me to portray a man, I’ll portray his wife instead.”

“I credit my mother for my love for the Bible. She used to read me Bible stories all the time and made it all seem so real,” she said. “And my dad used to be in plays. When I would see him perform, I thought that I’d like to do something like that.”

After retiring from teaching, Butler began her portrayals of women in history, and has written 19 books as well.

Butler’s next performance at the Ironton Senior Center is set for Wednesday, March 15, although she said she does not know who she will portray yet.

Wastewater plant last upgraded in 1987 The city of Ironton is trying to figure out how to deal with a... read more