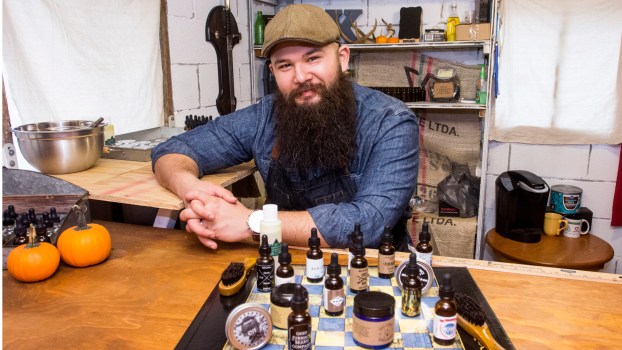 THE TRIBUNE/JESSICA ST JAMES Owner Ryan Klaiber of the Ohio Furnace Beard Company shows off some of his handmade products in his workshop. His line features products from clothing to beard care, shave and palm balm.

Ryan Klaiber doesn’t sound like the type of guy who would start his own line of men’s natural skin care products.

He works in a steel mill. He hunts. He fishes.

But a couple of years ago he grew a beard and from that, grew a business.

“I started growing the beard four or five years ago,” Klaiber said. “I noticed my skin was itchy, my beard felt brittle, had kind of dandruff on my face.”

His brother let him know there was such a thing as beard oil and he got some. He did some research and thought it was an easy thing he could make himself. So he got carrier oils and essential oils and set to make some.

Turns out it wasn’t as easy but “was more complex than I thought.”

The mixing is where it gets complicated.

“I use 20-25 essential oils, that’s where it all comes into play. You have to know X and Y to get Z,” Klaiber said. “That can be frustrating and time-consuming and expensive when it comes to the essential oils.”

With more research and some stove top experimenting, he found that he could not only make beard oil but balms and creams so he started making skin and hair care products too.

He experimented with drops of oil in different variations in the carrier oil until he got versions of his product he liked.

“It’s little more of a science than people would give it credit for,” he said, admitting that he was bored by science class when he took it in high school. “With the butters, there is a flash point when you’re cooking it that will actually burn out the scent.”

His wife helps out with mixing and pouring the products.

“I couldn’t have done this without her, she drove me and pushed me to get on it. I tend to procrastinate,” Klaiber said. “But I have always had this creative side to me. I literally design, make and print out all the labels. I design the shirts. There is a lot to it. I liked the idea of being able to do it all myself.”

His scents tend to be on the manlier side than most men’s skin-care products. No smells of a tropical beach or animals, instead it’s more nature based. Such as the Berserker Blend, which smells of wood, smoke and leather or Civil War which is “tobacco pipe; smoky, hearty.” Walter is named for his great-grandfather and smells like fresh-cut lumber. There is even Whitetail for hunters, which has no scent whatsoever.

He mixes batches of his products as the orders come in. He used to make it on the stove in his kitchen but as the business grew he needed more space. He cleaned out a concrete building next to his house that was just used for storing stuff.

“It was a dump in here,” he said of his workshop. He painted the walls, put in an electric line for lights and the cooking pots, built a counter and then decorated it with a poster of a boxer, a sword and band posters. “Once we saw it was growing, the kitchen was out of the question anymore.”

He describes him self as a typical Appalachian guy. He works in the mill at Steel West Virginia, enjoys hunting and fishing. But he was distressed that so many guys in the area just forget about their image.

“They just kind of let themselves go,” he said. “With this company, I wanted to be a part of bringing back the American-made man.”

That applies to the products he sells that he doesn’t make like a leather kit bag, which is made by a guy in Columbus under the name of Open Hand Leather.

“It’s just one guy, he does it all by hand,” Klaiber said. “That’s what America needs, good products made by small businesses.”

And despite the beard, the vintage looking work clothes and making natural skin products, Klaiber is no hipster trying to be cool.

“No, not what-so-ever,” he said. “There is something that has really intrigued me about the old school guy who was a man of faith, he took care of his family, and still a man of virtue and intregrity. Everything like that and what I aspire to be is infused in our products.”

He and his wife, Jennifer, have been together for 13 years and married for five years.

They have three children: four-year-old Kirra and 17-month-old twin boys, Bearyn and Rowyn.

Eventually, Klaiber would like to open up his own shop and sell not only his own products, but also boots and clothing. But he likes his job at steel mill.

“Something like a modern version of LL Bean, where we sold adventure gear and hiking gear. A good shop with quality hand made goods.” he said. “There are local craftsman who make great things by hand. That would be awesome if I could do that one day but the mill is a really, really good job.”

His products are sold in three local stores: Bare Arms Training Facility in Ashland, Champions Barbershop in Louisa and starting next week, Montgomery’s in Gallipolis.

“The majority is online through our Web site,” Klaiber said. “We get flooded on the Web site. We are shipping products every week.”

Ohio Furnace Beard Company products are sold to people in the area and even as far away as California. The farthest away he has shipped is to Afghanistan.

Their Web site is http://ohiofurnacebeardcompany.bigcartel.com.

The state share of funding for local schools could decrease under the proposed biennial budget put forward by Governor John... read more