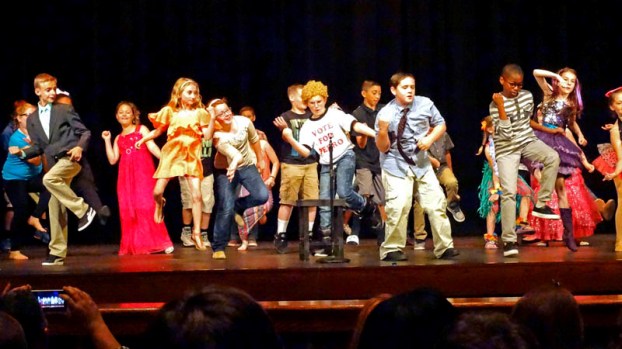 All the performers during the showcase finale dancing the Whip and Nae Nae.

Playin’ at the talent show

IES students will showcase their talents

Ironton Elementary will be having its talent showcase on Feb. 28.

The event will show off the variety of the students’ talents in the arts including skits, music, paintings and more.

“There is an art portion and a performance portion,” explained IES assistant principal David Ashworth.

All the skits, songs, jokes and performances were written by the students.

There are 22 artists in the art portion and 40 singers, dancers, rappers, comedians, a magician and skit performers in the performance portion.

The event will be at IES during the morning for the students and then there will be an evening performance for the public at 6 p.m. at the Ironton High School.

“We will be using the stage in the auditorium for the performances. We have 21 acts,” Ashworth said. “And the foyer area will be an art gallery. We will have paintings and drawings.

We have a sculpture that was entered. We have a couple hand-sewn items.”

“All together, we have about 60 kids that participate,” Ashworth said.

One of the acts will feature two fifth-grade girls doing a version of Jimmy Fallon’s “Ew!” sketch, where the two girls comment on things that gross them out. Ashworth is playing “the dorky dad” in the sketch.

Another act is a duo singing as one plays guitar.

Another skit will feature two second grade boys who do a dance while wearing three foot tall heads that look like a couple of the school’s administrators.

“They made the cut out heads themselves,” Ashworth said. “I’m one of them. We’re not saying who the other one is until the show. It’s the last act. I think its one of the funniest.”

To get into the showcase, the students had to audition two weeks ago.

“To be in it, we had an evening try-out/rehearsal,” he said. “We don’t cut anybody, because only those that are serious show up.”

A team of five fifth grade boys and a fourth grade girl will act as the masters of ceremonies.

“They are really what makes the show special because there aren’t any adults doing anything in the show,” Ashworth said. “Everything is done by the kids. They do the in-between skit jokes and announce the next act. They’ve been staying after school to practice.”

The performance lasts for about two hours.

Tickets for the evening performance of the IES Talent Showcase are $1 for students and $5 for adults. The reserve section tickets sold out on the first day they were available.