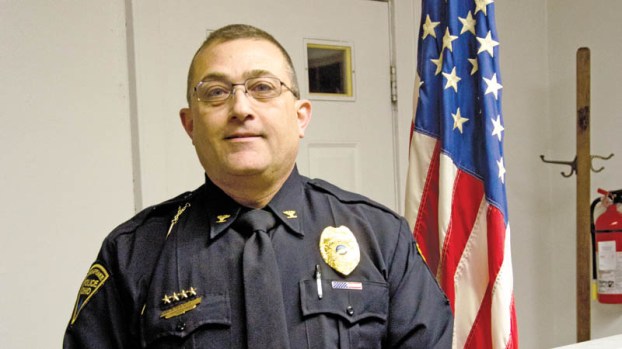 CHESAPEAKE — When Randy Lewis was sworn in as Chesapeake’s interim police chief in September, he knew his mission was to rebuild the department.
2016 had been a tumultuous year for the force, with the village’s chief Dennis Gibson, being removed from his job by council. His successor, Lenny Abrams resigned in August, along with two officers.

Following the crash that led to the death of officer Aaron Christian, the department was left with only one officer.

“We needed to get up to a fully functional police department,” Lewis said.

Having recently moved back to the area, he was recruited for the position by Mayor Tommy Templeton.

“I knew the mayor growing up,” he said. “His cousin and I went to school together. He asked if I would get the department up and running.”

As of February, Chesapeake now has seven officers on the job, some experienced and some rookies, just starting their career.

“I like good challenge,” Lewis said. “And this as good a challenge as any.”

Lewis has a 23-year background in law enforcement, and served as the chief of Millersport, Ohio’s police force for three years.

He also served overseas in both Iraq and Afghanistan from 2010-2016.

In Iraq, he was embedded with the Army and the U.S. State Department. In Afghanistan, he worked on a Quick Response Force, guarding the embassy in Kabul.

Last year, Lewis was honored by the State Department with the Award for Heroism for his service in Afghanistan.

Along with 24 others, he was recognized for his part in rescue efforts, augmenting security and directing recovery efforts, following a terrorist attack on Camp Sullivan in Kabul.

Lewis said he is working on getting the department up to speed.

“One of my goals is to get the new guys trained,” he said. “They’re a great group and I couldn’t ask for more.”

He said officers recently learned how to deal with drunk and drugged driving.

“It was excellent, world class training,” he said of the session, offered by Ohio State Highway Patrol Post 44 in South Point.

He said one of the top issues affecting the area is the drug epidemic, citing arrests made this week for drug activity.

“We’re making stops looking for this stuff,” he said, adding that he requested his officers be equipped with anti-opiate drug Narcan, to aid in combatting overdoses.

He said though Chesapeake is smaller than major cities, the problem is still impacting the region.

Another issue Lewis is working on is concentrating on enforcement of the village’s existing ordinances, on things such as neglected properties and vehicles, something he said has been neglected for some time.

As is the case with the mayor, the issue of abandoned and dilapidated properties has been a concern for the chief.

At February’s regular meeting of council, Lewis presented a slide show of 80 properties in the village that were in disrepair and urged the council to take action.

Lewis’ proactive approach to enforcement has earned him praise from the mayor and members of council.

“Never in my 24 years on council have I seen someone work so hard to enforce existing law and clean things up,” council member Paul Hart said. “He has got people to move cars and take mattresses out of yards. He’s ruffling a few feathers, but he has Chesapeake on his mind.”