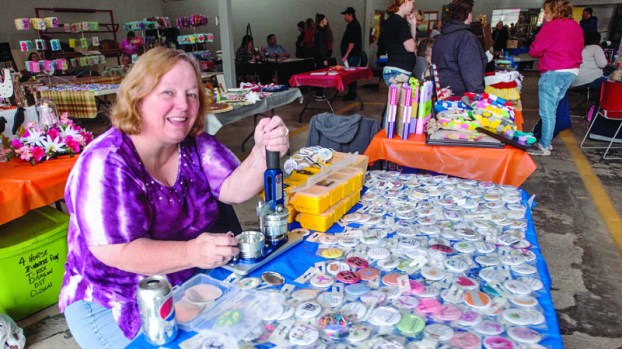 UPPER TOWNSHIP — It was a packed house at the Upper Township Fire Department for the chili cookoff fundraiser on Saturday.
Fire chief J.D. Pancake said 13 vendors from throughout the community were set up to serve chili to attendees.
“We’re here to see who has the best chili in the area,” he said.
Pancake said the proceeds would go toward the fire department, a volunteer force with a roster of about 25 people.
“We receive $60,000 a year from tax levies,” he said, which goes toward utilities and other expenses.
The funding from the event would help to pay for turnout gear and to replace air bottles and other equipment, he said.
In addition to the chili, about 20 vendors were present, selling everything from crafts, to food, to jewelry and makeup.
One of those was Jane Murphy, who was selling goat milk products, such as soaps and body creams.
“We raise goats and make our own products,” she said.
Murphy, who said she lives “right up the road” from the department, said she and her family have been selling the products for about two years.
“It’s been going really well,” she said.
Another vendor was Debbie Rogers, of Ironton.
“I’m selling American flag wreaths,” she said of the craft items, made from painted clothespins.
Upper Township fiscal officer Tyler Walters said the event was a chance for the community to show their appreciation of the firefighting force.
“It’s a great department,” he said. They work hard and they’re good stewards of the tax funds. As you can see, it’s packed here. It’s a community department and people can come out and see the firefighters and the equipment.”