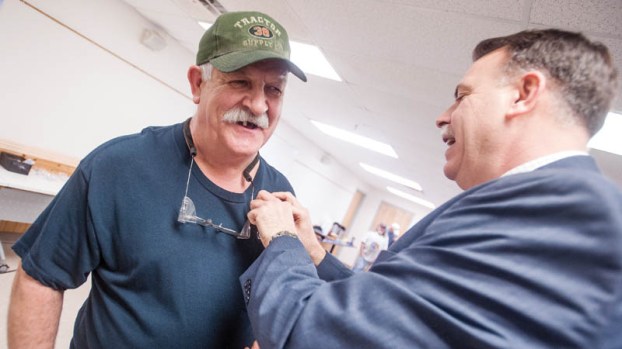 Lloyd Webb receives a special pin from Chip Tansill, Director of Ohio Department of Veterans Services, during a special ceremony for hiring Veterans at Vertiv.

On Friday, Vertiv and the veterans who work there were honored by the State of Ohio.

At a ceremony at the plant in Ironton, Col. Chip Tansill, the director of the Ohio Department of Veterans Services, gave out challenge coins.

“We seek out employers that hire veterans,” he explained, adding that it was to recognize the company to bring publicity to their company and make them want to hire more veterans.

“For a company that is about 375 people, that is amazing,” Tansill said. He added that veterans are a good hire because of their dependability and for being mission-orientated. “They get things done.”

As is the custom, Tansill handed out the coins during a handshake.

Tansill joked that anyone who dropped the challenge coin would have to drop and give him 50 pushups. While who came up with the first challenge coin is lost to history, most of the coins these days are given either to someone for being part of a military unit or as a gift. The coins are often used in challenges at a bar, if the military person doesn’t have a coin, they have to buy drinks. Sometimes the challenge is to see who has the rarest coin or the coin from the highest-ranking officer.

Tansill and Ohio Senator Joe Uecker passed out the coins and shook hands.

Uecker said he did not serve in the military but wore the uniform of police officer for 15 years.

“But three of my four children are Air Force officers,” Uecker, who represents the 14th District, said. “So you know where my interests lie in making sure our veterans are taken care of.”

The heavy coins are gold colored with one side bearing a large V, the triangle part of the Ohio flag and the words Ohio Department of Veterans Services. The other side bears a quote from Abraham Lincoln’s second inaugural address.

He said getting the challenge coin was very special to be recognized.

“It’s a good feeling to know there are people who appreciate what we did,” he said. “It wasn’t easy at times but we get more positive support than negative support this days. But this is special.”

Tansill, who spent 32 years in the U.S. Army and the Ohio National Guard, said Ohio has the sixth largest veterans population with around 85,000 former military personnel. Ohio veterans have one of the lowest unemployment rates, around 1.6, compared to an average of 4.3 for all Ohioans. Lawrence County has around 5,000 veterans.

He said that it isn’t common to have events like this, that they only do 15-20 a year.

“The veterans appreciate it because they are recognized as veterans in the community,” he said. “And they like for their company to be recognized. It’s validation that they have picked a good company.”

“We weren’t expecting it,” she said. “We have been working very hard to hire veterans, we have made a very concerted effort to do that. But it was a very pleasant surprise to be recognized for it.”

ROME TOWNSHIP — The Wyngate at RiversEdge became a casino on Saturday for its senior residents and their families. “We’re... read more