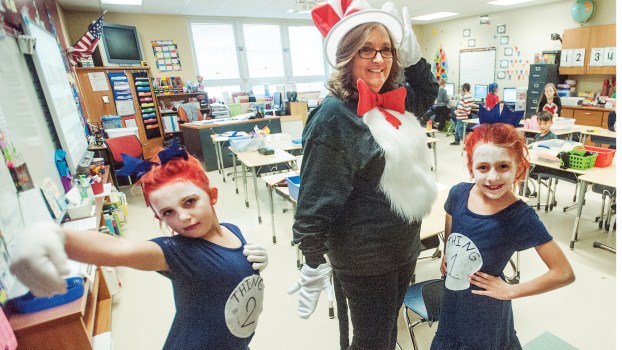 Annual celebration based around birthday of Dr. Seuss

Schools in Lawrence County have been celebrating Read Across America Week.

The program, established by the National Educational Association, is held annually in conjunction with the March 2 birth date of Theodor Seuss Geisel, the children’s author best known as “Dr. Seuss.”

At Burlington Elementary, librarian Harriet Ramsey booked several guests to come into the school each day to pick books to read to students during the school’s two lunch periods.

On Tuesday, the guest reader was Jack Nuckols, the husband of the school’s principal Sarah Nuckols.

He taught at South Point High School for 36 years, is an adjunct professor at Ashland Community and Technical College and has served on South Point’s school board.

“I picked ‘Everybody Needs a Rock,’” Nuckols said of his choices for the first session, with the kindergarten through second grade students. “And this one, ‘Stellaluna,’ about a bat, and “Time to Sleep.’”

At South Point Elementary, students were invited to dress up each day according to a theme, administrative assistant Bill Christian said, as the week’s events took part along with the school’s book fair.

Wacky Wednesday gave students a chance to wear “crazy socks and other things,” Christian said, while Thursday, themed around a visit from a South Point High student guest reader dressed as “The Cat in the Cat,” encouraged students to wear hats of their own. Friday’s dress-up, based on Seuss’ book, “Oh, the Places You’ll Go,” the last published in his lifetime, called for the children to wear their favorite team jerseys.

The guest speakers met in the library, where representatives from each of the school’s classrooms took them back to the students, where they read a Seuss book and conducted a question and answer session about their career.

Chesapeake Elementary has also been celebrating Read Across America week. Today the school will host a parade with students in costumes, and in the afternoon, the school’s top readers will get a chance to “dump slime” on principal Trisha Harris at an assembly.

For more photos from Read Across America Week in Lawrence schools, check out the Focus page in Sunday’s Tribune.

On a call with reporters on Wednesday, U.S. Sen. Sherrod Brown, D-Ohio, spoke out against the World Trade Organization and... read more