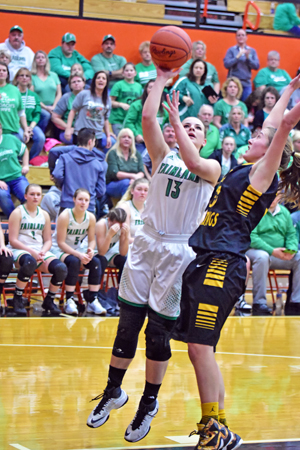 WAVERLY — Should’ve, would’ve, could’ve.
Missed shots, missed free throws and turnovers are all magnified and that causes coaches to second-guess themselves repeatedly. All those things weigh on the minds of players, coaches and fans in this type of game.
And it was “this type of game” as McKayla Binkley hit a 3-pointer with four seconds left to send the game into overtime and then she hit a 13-foot runner with 1.7 seconds left to give the Lynchburg-Clay Lady Mustangs a 58-56 win over the Fairland Lady Dragons in overtime on Saturday in the Division III district finals.
“I can’t take anything away from the players. The players did everything we asked them to do. We didn’t a lot of live-ball turnovers and we were worried about turning the ball over and letting them get out in transition and that didn’t happen too much,” said Fairland coach Jon Buchanan.
“I thought we played a very good game. It came down to a couple of plays. They made a couple of plays and that’s how it went.”
With the Mustangs’ defense focused on stopping Fairland leading-scorer Emily Chapman, Kelsie Warnock stepped up with 11 points — she hit three 3-pointers — along with eight rebounds and three assists.
Allie Marshall scored 14 points and Taylar Wilson had 10 points while Alesha Simpson added nine points and seven rebounds for Fairland (22-3).
“They obviously made some big plays, we made some big plays, too. We had a bunch of kids step up. Kelsie Warnock was big, Allie hit some big shots, Alesha fouled out (and) she was having a pretty good game. I was really proud of just a collective effort,” said Buchanan.
“To be quite honest, I don’t think a lot of people felt we were in the same class as Lynchburg, especially after Monday night when we didn’t play so great and they played great and people said it’s going to be a blowout.”

COLUMBUS (AP) — The first half of Saturday’s regular season finale had all the makings of a satisfying blowout for... read more