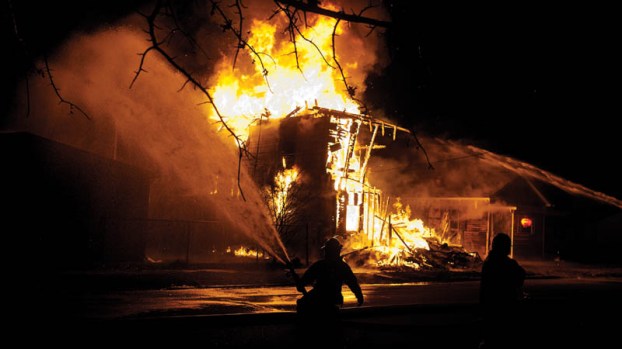 A Ironton Fire Department firefighter battles a structure fire late Sunday evening on North Fifth Street. The fire started in vacant home, located at the 1100 block of the street, and spread to the surrounding homes. Along with the local fire department, Ironton Police Department and Lawrence County Emergency Medical Services were on scene.

The Ohio State Fire Marshall was in Ironton on Monday to investigate a fire that destroyed one houses and damaged two others on Sunday night.

The house fire started late Sunday evening after the Ironton Fire Department crew spent the afternoon climbing a hill to put out a brush fire.

The fire department got a call around 10:39 p.m. about a structure fire at vacant house at 1054 North Fifth St. All IFD firefighters were called to the scene. The Ironton Police Department and the Lawrence County EMS crews were also called in.

The blaze was so hot it damaged the adjoining houses.

“It did damage to the houses at 1046 North Fifth St. and 1058 North Fifth St.,” said IFD city inspector Jeff Joseph. “They both got the siding completely melted off them. One is missing windows. One of them, it got hot enough that it actually melted the blinds behind the glass. It was pretty warm done there.”

Firefighters were on scene until 9:30 a.m. on Monday.

“We had somebody down there the whole time because we couldn’t put it all the way out and had to have a fire watch,” Joseph said. “After it got daylight, we went in and dug out all

the little hot spots and made sure our squatter wasn’t in there.”

A vagrant was living at the vacant house and there were concerns that he was still in the building during the fire.

He was not, and the inspector made contact with him on Monday.

“We accounted for him,” Joseph said. “He is someone  that people had seen coming and going from down there.”

He said they do not know the cause of the fire yet.

“There were no utilities in the structure,” Joseph said. “So it’s under investigation until we know what is going on.”

He added no charges have been filed. The state fire marshal and Joseph were interviewing people on Monday afternoon.

On Sunday afternoon, the firefighters were climbing the hill behind Ironton, where a cell tower is located, fighting a fire.

“We spent five hours out there, before we went to the other fire, with brush rakes, trying to get all that contained before it got into the cell equipment,” Joseph said. “We did get all of it out before it did any major damage. It melted a little bit of conduit, but it didn’t get into it.”

The cause of that fire is unknown, but Joseph said it probably was not a cigarette that was thrown out of someone’s vehicle.

“It started midway up that hillside, too far up for a cigarette,” he said. “We don’t know if we had a vagrant camping up there. We also had a report of fireworks being shot.”

The case is also under investigation.

Small space offers opportunity for right tenant Location is everything when it comes to setting up a business. And Ralph... read more