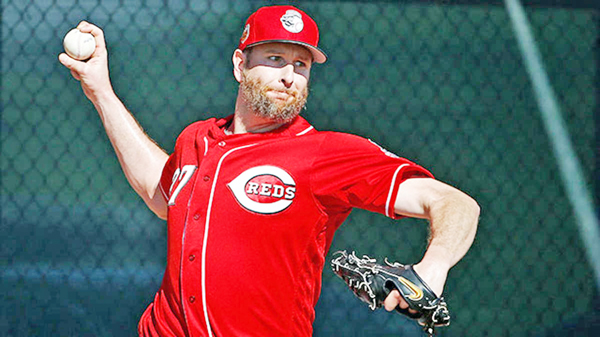 Right-hander Scott Feldman has been named the Cincinnati Reds’ Opening Day pitcher when they face the Philadelphia Phillies on Monday, April 3. Injuries have hurt the Reds’ starting rotation for the second straight year making Anthony DeSclafani and Homer Bailey unavailable to start the season. (Photo Courtesy of The Cincinnati Reds.com)

GOODYEAR, Ariz. (AP) — The Cincinnati Reds chose newcomer Scott Feldman to start on opening day against the Philadelphia Phillies.
It’ll be the third opening day start for the 33-year-old Feldman. The right-hander also opened seasons for Texas in 2010 and Houston in 2014.
Injuries have depleted the Reds’ rotation for the second straight spring training. Homer Bailey had surgery to remove bone spurs from his elbow and is expected to miss the first two months of the season. Anthony DeSclafani, who was in line to start the opener, will go on the disabled list with a sore pitching elbow.
Feldman signed a one-year deal with the Reds on Jan. 26 that guarantees him $2.3 million. He has a chance to make an additional $2.2 million based upon starts.
He was chosen over Brandon Finnegan to start the game on April 3 at Great American Ball Park, where he’s pitched only one other time in his career.
“It’s pretty cool,” Feldman said. “I know the about the history of Cincinnati, being like the capital of opening day.”
The city has a downtown parade before the opening game. Popular former Reds star Sean Casey is this year’s parade grand marshal.
Feldman’s only appearance at Great American Ball Park was a start for the Cubs on May 24, 2013. He took the loss after going 5 1/3 innings and allowing five runs, including a homer by Joey Votto. He also hit a homer off Bronson Arroyo, who is trying to win a spot on the Reds’ roster.
The Reds signed Feldman because they wanted a veteran who could fit into the middle of the rotation. The injuries opened the way for him to start the first game.
“He has a savvy that will serve us well,” manager Bryan Price said. “Part of the decision is the fact that we don’t have Homer or DeSclafani ready to go.”
Feldman will be the Reds’ third different opening day starter in three years. Johnny Cueto started in 2015, when he was traded to Kansas City. Raisel Iglesias started last season in place of DeSclafani, who injured an oblique during spring training. Iglesias was moved into the bullpen later in the season.