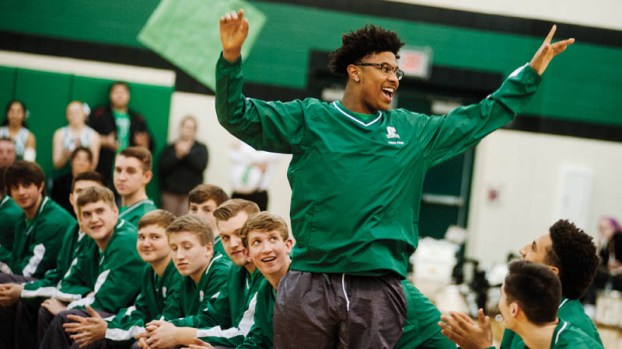 Isaiah Howell stands for an introduction along with other members of the Fairland boy’s varsity basketball team during a pep rally Wednesday.

PROCTORVILLE — The Final Four-bound Fairland Dragons were treated to a pep rally and send off by the school district Wednesday afternoon before taking off for Columbus for their chance at the OHSAA Division III state title.

Green flooded out the gymnasium, as both elementary schools, Fairland Middle School, the high school, faculty and staff, fans and county officials packed in for the event.

The cheerleaders led cheers for the crowd before the band started playing as the team took the floor.

Dragon’s junior Gunner Short began the pep rally by recognizing numerous groups throughout the school district for their recent accomplishments, and thanking everyone for their support of the team.

Gorby then recognized the last member of the “1961 Untouchables,” the last Fairland Dragons team to reach the Final Four of the state tournament, Doug Curry, who was also in attendance.

A production was put on by some of the Fairland West fourth graders, who portrayed members of the team, as well as performing pump-up song for the Dragons.

Fairland Head Coach Nathan Speed said he was thankful for all of the support from the school district and the community.

“I want to thank everyone for coming out and supporting us. In my opinion, with our team, what makes us so good is sacrifice,” he said. “All of us have made sacrifices to put the team ahead of themselves. They’ve done a great job all year and have made me proud. And our goal is to go to Columbus and make all of you proud.”

The Dragons are set to take on the Cleveland Villa Angela-St. Joseph Vikings in the OHSAA Division III State Semifinals at 10:45 a.m. Friday at the Ohio State University Schottenstein Center for a chance to compete in the state title game on Saturday.