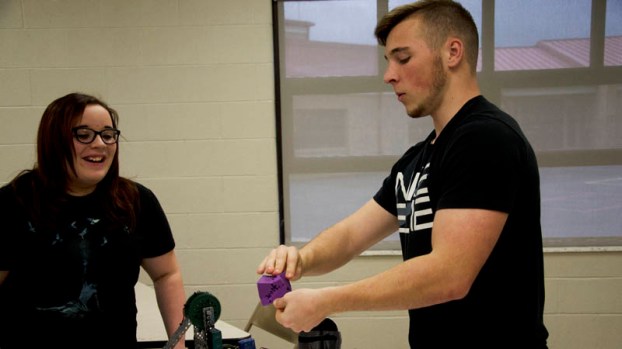 Wyatt Boggs, a junior at Dawson Bryant High School who is enrolled in Project Lead the Way courses, shows puzzles created using a 3-D printer during a presentation to Symmes Valley Middle School students on Tuesday.

SYMMES VALLEY — Representatives from Project Lead the Way were at Symmes Valley Middle School on Tuesday to show students what they can expect when STEM courses launch in the district’s schools in the fall.

Matt Monteville, director of satellite operations for Collins, said they hoped to give students an introduction to some of the activities and experiences they would find in Project Lead the Way classes, which were approved by the district’s board of education in February.

He said the seventh graders were learning about the introductory STEM program, which starts in the eighth grade and touches on a variety of fields.

“It has some engineering, some biomedical science,” he said. “They work as teams and learn to problem solve.”

In ninth grade, students can then sign up to take biomedical science courses through their senior year.

“We use medicine to work as teams and problem solve, and provide an introduction to hundreds of different medical careers,” Monteville said.

He said the preview had a good reception from the students.

“They do seem to be very interested,” he said. “We expect this is going to be a very popular program.”

Monteville was joined in the presentations by Gary Salyer, the transition coordinator for PLTW, as well as a number Dawson-Bryant High School students.

“They’re juniors and seniors and have been in the program for four to five years and are able to talk about their experience,” he said.

One of the students was Christa Porter, a junior, who was explaining DNA research.

“We did a program this year, where we extracted DNA from our cheek cells and put the DNA into wells,” she said.

Monteville said, once extracted, the students then made millions of copies of the DNA, which were put into a gel electrophoresis chamber.

“The DNA is then sorted, based on the size of the strands,” he said. “You can select what gene you’re looking for in the sequence of DNA.”

Porter said the goal was to see if the students had a gene, which would allow them to taste a bitter substance.

“Some people have it and some don’t,” she said. “We found that that half the class did, and half did not.”

Porter spoke highly of her time in the program.

“I absolutely love it,” she said. “I’m going into college, knowing a lot more than others know, just from these classes.”

She said she hopes to become an oncologist or a pathologist.

“I love everything about the body, and am interested in medicine and viruses,” she said.

She said the courses, which had given her college credit, had offered a hands-on learning experience, with the first day of the class having a mock crime scene and students being asked to determine the cause of death of the individual.

“I never touched a textbook,” she said. “The teachers have been so helpful. When I did this class in eighth grade, I knew this was going to be a great program.”

Adam McCallister, a senior, was giving a demonstration of medical devices.

“This shows how hard you’re gripping something,” he said of one of them. “It’s used in real life by doctors and nurses who are treating someone who suffered a stroke. In a stroke, if there’s brain damage, you lose motor functions.”

He also showed a LabQuest Mini, a multipurpose interface unit, which can be connected to things like a mini EKG machine or a heartbeat monitor.

He said one project in the class had students watch a video on Youtube with a lot of jump scares while using the devices.

“They would hold these and wait for the scary part,” he said. “When that part happened, their rate jumped up. Then, after a few seconds, they realized it’s just a movie, and it went down quickly.”

Wyatt Boggs, a junior, showed students examples of items made with a 3-D printer, a piece of equipment Symmes Valley’s STEM classroom will be furnished with.

Boggs said he hopes to enter the medical field.

“I’ve done stuff with EMTs and volunteered at the VA hospital,” he said. “It’s a very nice program and not your typical school class. It’s hands on and it makes it really interesting.”

Monteville and Salyer will be at the school on Thursday, from 6-8 p.m. to host a meeting on the program for parents and to start sign-ups for the program.

Similar meetings are planned next week for other school districts working with PLTW.

On Monday, a parents night event will take place at Chesapeake High School from 4-6 p.m., while Rock Hill Middle School will host a similar meeting from 6-7 p.m. on Tuesday.