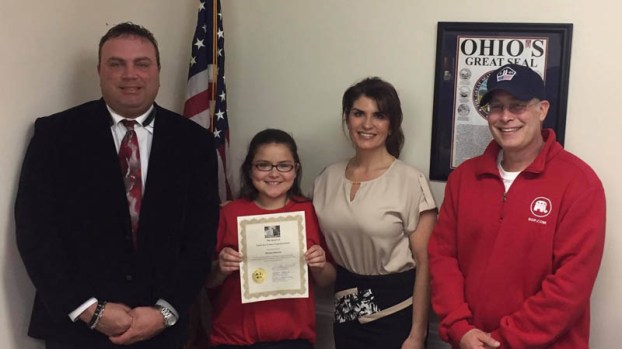 The Lawrence County Board of Commission took its meeting to the eastern end of the county this week, conducting their meeting Tuesday evening at the Rome Township Hall following the township trustee meeting.

Thompson, who was just sworn into the position this past December, gave an update on his job so far this year, as well as talked about the goal of the humane society as a whole.

Thompson said that this year, he has taken 37 calls regarding animals, including 88 dogs, seven cats, one hog, six goats, 26 poultry, 10 horses, 10 rabbits, one hermit crab, one bird and two fish.

He added that although he has the power to arrest and seize animals, the main goal of the humane society is to educate people.

“We educate people on how to feed properly, how to give proper shelter and how to be responsible pet owners,” he said. “A lot of people fall on hard times and can’t take care of their pet. We want to let people know that if you can’t take care of your pet, how to get rid of it the proper way.”

The Lawrence County Animal Shelter is a no-kill shelter, and animals up for adoption in the county include puppies and dogs, kittens and cats and horses.

Anyone who wishes to be a part of the Lawrence County Humane Society may do so for $5 a year by calling Thompson at 740-285-6897 or Lawrence County Humane Society President Laura Brown at 740-646-2795, or by attending the next meeting at 7 p.m. Monday, April 24 at the Ironton City Center. The annual $5 fee goes toward spay and neuter costs as well as a few various other things such as rabies vaccines.

In the weeks leading up to the donation, Malone collected dog and cat food, blankets, kennel bedding and toys at school, while her mother collected supplies at work to take to the shelter. Holliday assisted her when she took them to the shelter as well.

At the meeting Tuesday, Holliday presented Malone with a certificate from the commissioners recognizing her for her effort.

Lawrence County Treasurer Stephen Burcham gave a report on the first half tax collections, stating that this year broke a new record in Lawrence County.

Second half tax collections are due July 7.

Gerald Bloss, with the Proctorville VFW Post 6878, asked the commissioners about extending an agreement for the post to take care of land owned by the county to make improvements over the next few years. The post takes care of the land and uses it as a campground.

Commission said they are getting an opinion from Prosecutor Brigham Anderson and would get back to him as soon as they hear something.
During the commissioner’s reports, all three commissioners thanked the Rome Township Trustees for allowing them to host their meeting at the township hall, and commended the Fairland boy’s basketball team on this season’s success, reaching the state Final Four.

Also at the meeting, the commissioners:

• Approved and signed the weekly invoices and certificates as presented by the Auditor’s Office.

• Received and filed a letter from the Lawrence County Educational Service Center regarding office space in the courthouse.

Students give gift of life