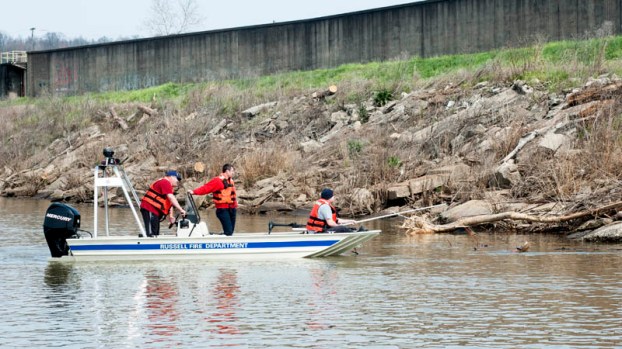 Rescuers from the Russell Fire Department continue to search for a possible bridge jumper Thursday. The jumper was reported to have jumped off the new Ironton-Russell Bridge Wednesday night.

According to interim Ironton Police Department Chief Joe Ross, a call came in to the Greenup County 911 Wednesday night around 8 p.m. that a person had jumped off the new Ironton-Russell Bridge.

“When we arrived, there was a car abandoned on the new bridge” Ross said. “At this time, we do not have any confirmation.”

Numerous agencies from multiple states joined in the search of the river Wednesday night, including a helicopter from Columbus.

Members of the Russell Fire Department took a boat on the Ohio River on Thursday morning but found nothing.

“We are still looking,” Ross said on Thursday afternoon.

He said if the woman did jump in the river, it’s a guessing game to where she is.

“We don’t really know if she is down the river, if she is still here (in Ironton),” he said. “A body acts differently in different water temperatures, then there is the water current. There are a lot of factors.”

Ross said it would probably be a day or two before a body would re-surface “if she is in the water.”

“There are a bunch of rumors going around but we have not confirmed anything at this time,” he said.

With the call coming into the Greenup County 911, Kentucky law enforcement agencies are the lead on the investigation with assistance from Ironton and Ohio agencies.

Anyone has any information that could held law enforcement and emergency agencies involved in the search, they are asked to contact the Ironton Police Department at 740-532-2338 or the Greenup County 911.

Continue to check back to The Tribune’s website and Facebook for updates as they are made available.