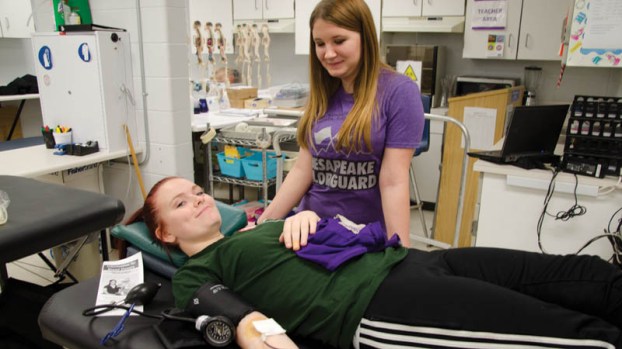 Kimberly Reynolds, a junior at Chesapeake High School, donates during a Red Cross blood drive at the school on Tuesday.

Students give gift of life

CHESAPEAKE — Nurses from the American Red Cross were at Chesapeake High School for the second time this school year to help out with a blood drive.

Sydney Harlow, a senior at the school who served as student leader for the event, said the event was important because it provided a chance for the students to give.

“It encourages the students to help others in need,” she said.

Two nurses manned three donor stations for the drive, which was promoted within the school.

“It was aimed at people in the school,” Harlow said. “And family members of students. But we’ve had some walk-ins from the community, too.”

Harlow said both of the drives the school has hosted this year have been a success.

“We’ve exceeded our goals both times,” she said.

Crews will resume search today According to interim Ironton Police Department Chief Joe Ross, a call came in to the... read more