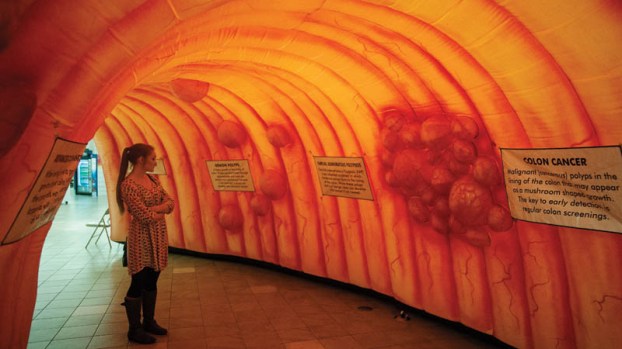 ACTC student Nicole Ison strolls through the Mega Colon on display at the Ashland Town Center on Friday.

ASHLAND — An eye-catching display was set up at the Ashland Town Center to educate passersby about the risks of colon cancer.

Staff from King’s Daughters Medical Center, Our Lady of Bellefonte Hospital and the Kentucky Cancer Program teamed up for the collaborative event, which provided health information and offered blood and cholesterol screenings.

The centerpiece of the event was the Mega Colon, a giant, inflatable colon that people could walk through and see examples of polyps, cancer masses and other problems.

“March is Colon Cancer Awareness Month and our intent today is to reach out to people,” Amy Shepard, who works in oncology service at King’s Daughters, said.

Giving a tour of the display, which was brought in by the cancer program, Shepard said the first part showed healthy tissue.

“This looks nice and normal,” she said.

As she walked through, she pointed out benign polyps, and then an example of familial polyposis.

“This is a person who has literally hundreds of polyps,” she said.

Finally, there was a mass of cancer cells, followed by an example of advanced cancer.

“This is going through the walls of the colon,” she said of the final mass.

Shepard said people will not feel any symptoms in its early stages. Later symptoms can include blood in stool or a change in bowel habits.

But she said colon cancer is highly treatable if detected early.

“The big thing is getting the screenings done,” she said.

Shepard said people 50 and over should get regular screenings, though those who have a history of cancer in their family should start earlier, as heredity can be a factor.

Sexton gets 20 years for attack on girlfriend

Marvin E. Sexton, 52, of Chesapeake, was sentenced in Judge Charles Cooper’s courtroom on Wednesday to a total of 20... read more