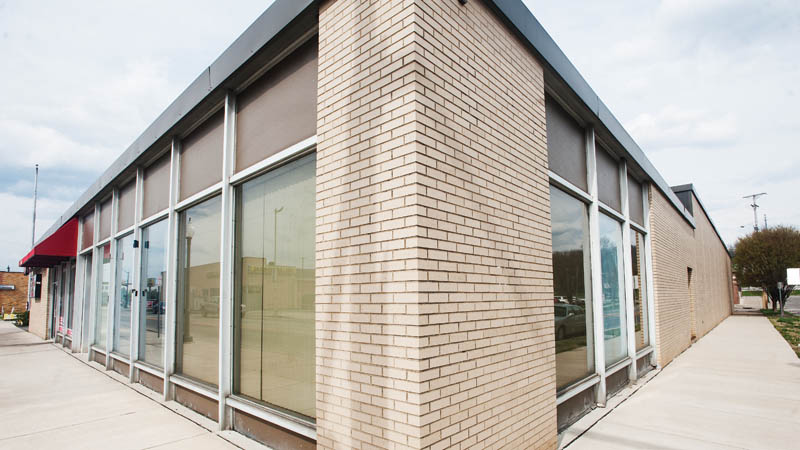 Thanks to the opening of the new Ironton-Russell Bridge, the former AEP building at 525 S. Third St. in downtown Ironton is now in a high-traffic area.

The building was once used as an office and storage area for the electric company, and now it has been divided. Marco’s Pizza is in half of what was once the front office area.

The other half of the front has multiple offices and still has ‘60s-era stoves and a dishwasher in the kitchen area. The back part of the building is more offices and a large warehouse area and a loading bay.

“The intent is to split it three-ways if we get tenants,” said Tab Estep, the project compliance technician with the Lawrence County Economic Development Corp.
AEP left the building roughly two years ago to move to a new building at The Point in South Point after the company consolidated the Ironton and Chesapeake facilities.

“It’s in good shape. It just needs to be finished to suit a tenant,” he said.

The building was built in the early ‘60s.

The kitchen dates from when the company was called Ohio Power.

“I’m told they sold appliances and it was their display area,” Estep said. “It goes back in time for me. It’s probably ‘60s, it’s cool.”

Estep said the building lost parking out front when the road was changed to accommodate bridge traffic, but there is parking on the side and in the back across the alley from the Ironton Fire Department building.

“It’s a good location with the new bridge,” he said. “And there is quite a bit of parking still.”

The back space is separate from the front offices.

There is even a caged-in area for secure storage. There is an unusual feature of a heated closet.

“I think that’s where they stored telephone poles,” Estep said. “I guess it had to stay heated so it would draw moisture.”

The warehouse is 8,500 feet with a three-door loading bay area.

“It’s a lot of space in here,” Estep said. “And the offices over here are still in good shape. Everything was working when they left and it hasn’t been long since they moved.”