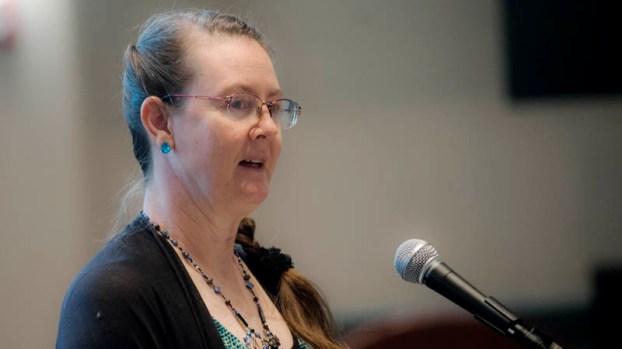 The event, billed as celebrating the stories and art of women in the region, featured poet, songwriter and essayists who submitted their work for the juried presentation.

“It features women from all walks of life,” Sarah Diamond Burroway, the director of external relations for the school, said.

She was one of the writers featured, reading her essay, “Morning Milk,” written in the voice of her mother, who struggled through poverty with her three children in her early 20s.

The annual event was created by Kari Gunter Seymour, who wanted to showcase women in the region and change perceptions in how they are viewed.

“If you’re from Appalachia, you figure out, pretty early on, that there’s an image of an Appalachia woman, and people look down on her,” she said in her opening remarks.

She said she wanted to address the discussion and get people to look beyond that.

“To get to see the whole woman, beyond superficial factors,” she said.

She also said that art like that presented in the showcase, is needed in “turbulent times.”

“We’re not sure what’s going to be happening in the future,” she said. “Now, more than ever, beautiful stories and songs are needed.”

The Women of Appalachia group has more events planned in the region in coming weeks.

On April 14, a fundraiser will take place on the main Ohio University campus in Athens, to benefit My Sister’s Place domestic violence shelter.

And, on May 1, an esteemed poetry event is set for Bossy Girls, at 2598 N. High Street in Columbus.

For more information, visit www.womenofappalchia.com or Women of Appalachia Project on Facebook.

KITTS HILL— The South Hills Longbeards Chapter of the National Wild Turkey Federation is planning on raising the spirits of... read more