Going all the way 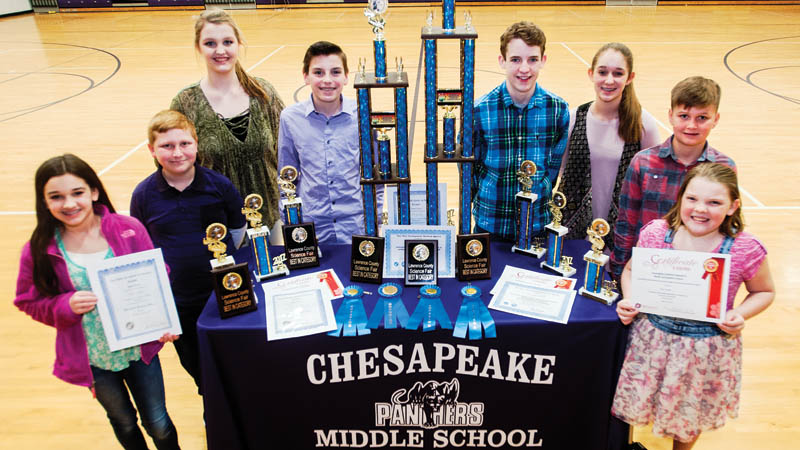 CHESAPEAKE — Chesapeake Middle School is continuing its winning streak in science fairs, with four students on their way to compete at the state level.

Nine students received “superior” rankings, making them eligible to compete in the district fair at Rio Grande on March 25.

Of those, Snyder, Alison Plantz, Kelley Dingus and Dawson Forbush qualified at district to attend the state competition, set for May 13 at The Ohio State University in Columbus.

Julie Byers, a sixth grade science teacher who coordinated the school’s fair efforts, said the projects came about as a result of months of work.

“They’ve literally been working on the science fair, since the second week of school,” she said.

A former science fair winner, who describes herself as “a competitive person,” Byers said she paid a pitch to the students early on.

She told the students early on about the prizes and scholarship opportunities available to winners.

“I told them there’s money in this,” she said. “That helped motivate a lot of kids.”

In addition to leading at the county fair with a perfect score from the judge, Snyder, an eighth grader who lives in Chesapeake, was first in the seventh/eighth grade category. It was his third year competing in the fair.

“I used magnetic structures and wires to create generators to create electricity,” he said of his project.

He created the generators in three different stages and tested the most efficient one.

“It’s pretty awesome, but a lot more luck,” he said of qualifying for the state competition.

He said he has been tweaking and improving his project, based on suggestions from judges at the county and district fairs.

“I have to go back and measure RPMs,” he said.

At the district fair, Snyder also won the Governor’s Thomas Edison Award for Excellence in Advanced or Alternative Energy Resources and two Emerging Scientist Awards, in the categories of Engineering and Computer Sciences and Health and Applied Sciences.

She said she has known Snyder since she first had him in class in the sixth grade.

“He told me back then that his goal was to get this far,” Byers said.

Allison Plantz, of Chesapeake, received a superior rating at district for her project, which focused on optical illusions.

“I wanted to know which age group see optical illusions,” she said.

To test it, she used an autostereogram of a 2-D image of chevron lines, which allowed observers to see a 3-D image of a panda, similar to “Magic Eye” books.

“I tested three different age groups and recorded what they saw,” she said.

She found that the age group of nine to 20 years were most successful, with about 50 percent of subjects being able to see the panda.

“I think it’s because eyes are still developing a lot at that age,” Plantz, who won the Edison award for Excellence in Information Science and technology at district, said.

As a sixth grader, it was her first year to compete in the fair.

“I will definitely be coming back next year,” she said.

Forbush, a sixth grader from Proctorville, took fourth place in the fifth/sixth grade category at the county fair and received a superior rating at district with his project, “Bacterial Biohazard.”

“It was an analysis of which school surface inhabits the most bacteria,” Forbush, who won the Emerging Scientist Award in Earth and Biological Sciences at the district fair, said.

Forbush took swabs of a toilet seat, a bathroom door, a water fountain spigot and a computer keyboard.

While he expected the spigot to have the highest rate, it turned out it was the keyboard.

“I know for a fact that a lot of people here don’t wash their hands,” Forbush said. “And when they use the keyboard, they’re exposing themselves to 143 kinds of bacteria colonies and a few kinds of mold.”

Dingus was not present when The Tribune interviewed the students on Monday, but she will also be headed to state for her project “Healthy Gum.”

Also winning an Edison award at the district fair was Emily Tackett, for Excellence in Biotechnology and Biomedical Technology.

Byers said Tackett has a prosthetic leg and tested its abilities against her running leg.

Science will be in the spotlight at the middle school next week, when it hosts its second annual science night on April 13, starting at 4:30 p.m.

The event, organized by Byers, will feature hands on workshops for elementary students in the district, as well as a visit from the Columbus Zoo and the Carnegie Science Center of Pittsburgh.
Students can pre-register for the event, with forms sent home with them.