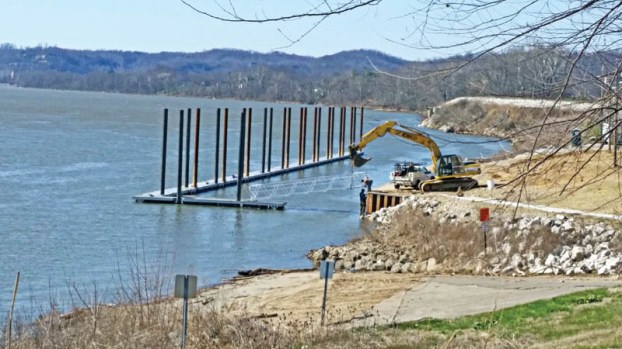 A crew from Allard Excavation, LLC put the finishing touches on the floating boat dock at the Ironton riverfront.

Construction on Ironton’s Riverfront marina is nearly done and ready for the summer boating season.

“It’s going well, it’s just about complete,” said Michael Williams, an engineer with E.L. Robinson Engineering, who is overseeing the project. “We need to do some final cleanup, but the docks are installed, the gangway is installed. It should be complete very soon.”

The $670,000 boat dock is part of the Ironton Riverfront Boat Ramp and Docks project that is a long time coming. The Ironton City Council approved the project in 2011 and it was bid out in late 2015 to Allard Excavation, LLC, of South Webster.

The money for the 30-boat dock came from the Ohio Department of Natural Resources as a boating infrastructure grant. The docks can accommodate boats up to 26 feet long.

This marina isn’t for long term docking. Williams said the grant was for the construction of a “transient boating facility.”

“We’re trying to bring in people that are passing through, going up and down the river,” he said. “They can stop in, use the boat tie-up and hopefully, come into Ironton.”

The city has applied for a Co-Operative Boating Facilities Grant to actually re-do all the parking and the boat ramp but the state didn’t take applications for those grants in the last fiscal year.

“But hopefully, this is the beginning of something more down there on the riverfront,” Williams said. “But now, we do have a nice floating dock.”

The city’s goal is make the dock the first part of a larger project to rejuvenate the Ironton Riverfront that would eventually include a walking trail and bathrooms.