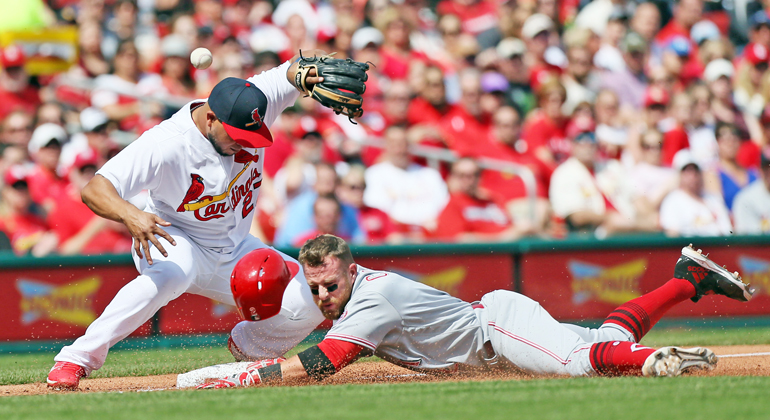 Cincinnati Reds’ Zack Cozart slides safely into third with a triple as St. Louis Cardinals third baseman Jhonny Peralta is unable to catch the throw from center field in the fifth inning on Sunday at Busch Stadium in St. Louis, Mo. A run scored on the play n the Reds 8-0 win. (Chris Lee/St. Louis Post-Dispatch/TNS)

Feldman allowed four hits and struck out six in six innings, and the Cincinnati Reds beat St. Louis 8-0 Sunday to take two of three from the Cardinals.

“My command was much better this time (than opening day),” Feldman said. “It makes it a lot easier when the guys come out and put all those runs on the board. They swung the bats great today against a really good pitcher.”

Adam Duvall had three hits, including a home run, and two RBIs for the Reds, who have won just five of their last 40 series at Busch Stadium.

All that past futility is just that — in the past, Cincinnati manager Bryan Price said.

St. Louis went 2-4 on its opening homestand and heads on a six-game trip to Washington and the New York Yankees.

“After coming off a good game yesterday, we were hopeful that it would be the key to spark a good long roll,” Matheny said. “We had trouble getting anything going today. We’ve got to keep searching for that really good rhythm.”

Feldman left after the Cardinals put their first two runners on in the seventh. Blake Wood and Tony Cingrani completed a six-hitter.

Duvall homered in the second, the first run off Martinez this season after 8 1/3 scoreless innings.

“He’s got a good fastball,” Duvall said about Martinez. “I wanted to try and stay square on him and not try to over-pull the ball because then it opens up the outer half. And with Yadi (Molina) back there, and with the two of them going, it’s going to be a tough at-bat. I was able to get something to hit and put the barrel on it.”

Zack Cozart tripled in a run in the fifth, and the Reds chased Martinez in the sixth as the Cardinals made three errors, including two on one play by third baseman Jhonny Peralta.

“I’ve made three or four errors sometimes in a game before,” Peralta said. “It happens to everybody. Today, I made a really dumb play.”

Martinez hit Jose Peraza with a pitch, threw a wild pitch and walked Joey Votto. Duvall singled for a 3-0 lead and Peralta allowed Eugenio Suarez’s grounder to bounce off his glove, then threw the ball into right field for a double error as Votto scored.

Scott Schebler hit an RBI double off Brett Cecil, and a second run scored when right fielder Randal Grichuk fumbled the ball for an error as he tried to throw.

Votto homered leading off the ninth.

Cincinnati’s Stuart Turner doubled leading off the third for his first major league hit. The 25-year-old, who made his major league debut Thursday, is the first Reds catcher to skip Triple-A and make the opening day roster since Tucker Barnhart in 2014.

Reds: Kevin Mesoraco (right hip surgical recovery) was not to have a day off Sunday in his injury rehabilitation assignment at Double-A Pensacola, then catch nine innings Monday.

Cardinals: RF Stephen Piscotty sat out for the second consecutive game with a sore left knee, hurt when he was caught stealing Friday. He did not play Thursday as part of the concussion protocol. He was hit in the head by a throw while sliding home Tuesday against the Chicago Cubs.

Reds: LHP Brandon Finnegan (1-0) was to start Monday against Pittsburgh and RHP Tyler Glasnow. Finnegan, who turned 24 Friday, became the first Reds starter to pitch seven shutout innings while allowing no more than one hit in his first start of the season since Jerry Arrigo in 1967.

C.Martinez pitched to 4 batters in the 6th

Feldman pitched to 2 batters in the 7th