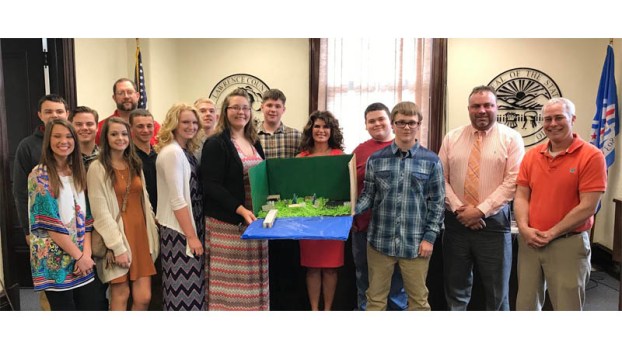 The students asked commission for about $2,500 for the project, which would include cleaning up the property and adding benches, picnic tables, trash cans, a few grills and some supplies, making the park nicer for activities such as fishing, picnicking and walking by the riverbank.

“We’re very happy to partner with you on this project,” Commissioner DeAnna Holliday said. “This group is very sincere with their intentions and really wants to make a positive difference. I think a lot of people will jump on board with this.”

Commission President Bill Pratt said that commission would ask Lawrence County Prosecutor Brigham Anderson for an opinion, but that he didn’t anticipate there being any issues.

Pratt added that the money commission would give for the project would come out of the $15,000 appropriated for parks and recreation, which hasn’t been touched yet, and that although nothing official has been set yet, he expects commission to award the Symmes Valley students around $3,000 for the project.

The commissioners also approved a resolution for the payment of the alarm bill and utility bill at the ORV facility in Franklin Furnace. Commission decided that they were going to pay the alarm bill, which they verbally agreed to do, and not pay the utility bill, which will keep the lease termination in tact, which is set to expire in early May. The move likely closes the door on a potential jail move to the ORV facility.

Commissioner DeAnna Holliday, a strong proponent of the jail move, said that although she was disappointed the move was most likely off because agreements could not be made all the way around, she was excited to move forward with another plan for the jail in the future.

• Approved and signed the weekly invoices and certificates as presented by the Auditor’s office.

• Approved and signed the resolution authorizing the Lawrence County engineer to participate in the ODOT Winter Contract for road salt.

• Approved and signed the Marine Patrol Assistance Agreement with the Division of Parks and Watercraft as requested by Lawrence County Sheriff Jeff Lawless.

• Approved and signed the resolution against the loss of Medicaid Managed Care Sales Tax Revenue.

• Received and filed the 2016 Jail Inspection letter from the Ohio Department of Rehabilitation and Correction.

• Approved the final payment for the Farmview Wastewater Improvement project.