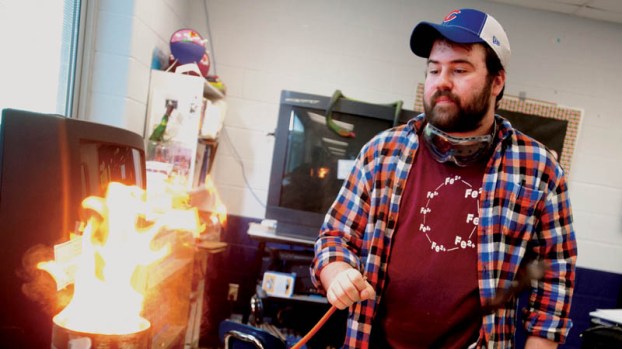 The event was open to students from Chesapeake Elementary, who took part in science workshops throughout the evening, followed by a presentation from the Columbus Zoo.

Julie Byers, a science teacher at the school, said that 12 of the 17 workshops were taught by students from the high school.

Byers organized the event with her fellow science teachers at the middle school, Danny Cash and Alicia Spears.

Also on hand was the Carnegie Science Center of Pittsburgh, who took students on an Anatomy Adventure detailing the human body.

The presentation featured pressurized canisters to represent burping in the digestive system, stretchable bands to show the flexibility of muscles and a video to test short-term memory in the brain.

When discussing the digestive system, Jason Dohoda, of the center’s Science on the Road program, asked the students how long they estimated the length of the small intestines were.

Many in the crowd made a guess, ranging from five to 80 feet.

To illustrate, he had one student don an apron featuring various body parts and had another take hold of the intestines and pull them out to their full length.

“On average, they’re 20 feet,” Dohoda said. “But with shorter people, they can be smaller and they get larger with old age.”

“This is an exothermic reaction,” he said of the rising foam. “If you touched it, it would probably burn you.

He was joined by fellow graduate and undergraduate students in the demonstrations.

“We have a local chemistry fraternity and we do magic shows for kids,” Coleman said.

Bob Oehler, who teaches for the program at Chesapeake, gave children a chance to use a remote to control VEX Robotics samples in the cafeteria, while, upstairs, Matt Monteville, the director of satellite operation for Collins, was hosting an engineering challenge in which children built a boat to see who could hold the most weight.

In the next room, Angie Kelly, who teaches PLTW biomedical classes at Chesapeake, led students in dissection of a sheep’s heart.

Mikaela Shockley, a high school student in the program, held up the heart, explaining where the aorta, pulmonary vein and vena cava were located.

The event wrapped up with the zoo’s exhibit, which featured appearances from a Madagascar penguin, a ring-tailed lemur, a baby kangaroo, a cheetah and other animals.

The event gave Chesapeake High School students a chance to share their knowledge of science.

Evan Goodall, a junior, was leading activities in paper chromatology and electricity in a session.

“I’m here as a volunteer,” he said of the event, which kicked off spring break for the schools. “I’m in AP chemistry.

Also teaching in the session was sophomore Taylor Burnette.

“I wanted to this,” she said. “I came to a similar event in the seventh grade and I loved it.

Burnette has high praise for the school’s science program, and said that Spears had helped her to understand chemistry.

She was helping the children to make marker designs on coffee filters, which were then dipped in alcohol, which caused the colors to bleed out.

“Science Night is awesome,” she said. “I love watching the kids explore.”

ROME TOWNSHIP — The Wyngate at RiversEdge kicked off the Easter season with a community event on Friday. A Brunch... read more