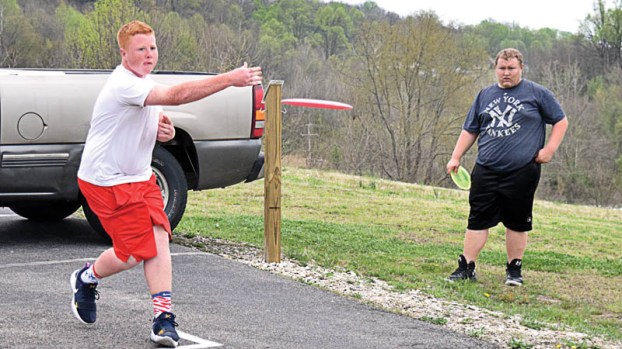 Ryan Fetty, a ninth grader at South Point High School, launches a disc from the starting point of the new disc golf course on the grounds of the high and middle schools.

SOUTH POINT — A new addition to the campus of South Point high and middle schools offers a chance for students, faculty and community to have fun and stay fit.

Work began in October on a disc golf course on the grounds of the two schools and it opened for use in January, Mike Schwartz, the high school’s assistant principal, said.

He said the project was a joint effort of Ben Coleman, the principal at the high school, and Greg Sullivan, the assistant principal of the middle school.

“Mr. Coleman and Mr. Sullivan spent most of the winter, working hours, setting up the stones and the tee boxes,” he said.

The course begins on the law in front of the schools and goes into the woods, behind the stadium and along the sidewalk beside the school.

“We have nine baskets, and we’re trying to turn it into an 18-hole course,” Schwartz said.

He said, in addition to being available for use to the schools’ physical education classes, the course is open to the public every day after 3 p.m., with the exception of nights of sporting events.

Schwartz said the course has been popular with the schools’ teachers, who partake in it after the workday.

And the schools hosted a tournament on the course on April 1, drawing visitors from across the Tri-State.

“We had about 70 people here,” Schwartz said.

Travis Dillon, a junior at the high school, said he plays on the course often.

“I do it with my family — me and my brothers,” he said, adding that the hills and terrain make for good exercise. “It gets you walking.”