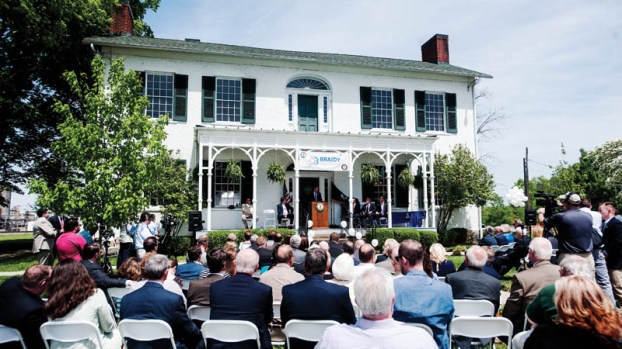 Attendees meet at the McConnell House in Greenup, Ky., to hear the official announcement of a new aluminum mill. The new mill will bring over 500 jobs to the area.

WURTLAND — Kentucky Gov. Matt Bevin joined Greenup County Judge Executive Robert Carpenter and Braidy Industries CEO and Chairman Craig Bouchard Wednesday afternoon to announce the location of Braidy’s new aluminum manufacturing facility. The new, $1.3 billion plant will be located in South Shore, on 370 acres adjacent to the Ohio River, and will produce milled aluminum for use in the automotive, airline, and defense industries.

Bouchard, first when speaking to the crowd and again later to reporters, emphasized that Kentucky’s recent switch to a right-to-work state, was instrumental to his decision to locate there.

“If it weren’t a right-to-work state,” Bouchard said, “it wouldn’t have been on the list.”

Bouchard said that other factors in his decision included the proximity to transmodal facilities offering river, rail, and highway transportation, as well as a highly skilled industrial workforce.

“This was the place we could get the most highly skilled, devoted employees,” Bouchard said.

But Bouchard, whose résumé includes several hostile takeovers of other metals industries, told reporters that right-to-work was critical because his industry needed to be light and agile.

“We’ll be producing up to 20 percent of the aluminum in new automobiles,” he said.

That means, he said, “if Ford calls us… and we have to work on a Sunday,” they will.

He said that he felt trade unions were too rigid for him to be able to run his company as he saw fit and for the flexibility that was needed for his company to succeed.

Braidy still has to complete the permitting process before construction begins on the new plant, but Bouchard said they will employee around 1,000 individuals in the construction of the site and around 550 full-time employees after completion, with an average salary of around $75,000 per year.

Greenup County Commissioner Tony Quillen, who gave credit to Carpenter for helping bring the project to Greenup County, said that the exact details of the plan were kept secret until the last minute, even from him.

“A lot of it was secretive, as you well know,” Quillen said. “We knew something was happening. Bobby (Carpenter) had basically said he was working on something huge, but we had to trust him, because he couldn’t give the name. Couldn’t give the details out. We understood. We’ve worked with Bobby before, and Bobby’s always been great to keep us informed, so we knew this was something really big. He called us yesterday (Tuesday) finally and filled us in on pretty much everything.”

Quillen still didn’t know the company name, though, until showing up for the event on Wednesday.

“Obviously it’s a great win, not just for Greenup County, but Boyd County, Carter County, Scioto County, and Lawrence County, but one thing is County Judge Bobby Carpenter for 24 years… has taken Greenup County’s message to every place he can.”

Quillen said that these jobs are a great legacy of Carpenter’s hard work to promote the county and champion economic development for the area. He also praised Carpenter for working in a bi-partisan manner with the governor’s office to bring these jobs to northeastern Kentucky.

“I’ve always said, people want government to work for them,” Quillen said. “Especially in this day and age. Here,  we had a Republican, pro-growth… governor working with Bobby, whose taken our message numerous times to places, working together, and you see what we got.”

Carpenter, for his part, was humble, acknowledging that this was a team effort.

“We’ve been working a long time, especially with economic development,” Carpenter said. “Tim Gibbs… up at the Ashland Alliance, and our board, I’m on that board, we worked on this thing for years and years. We’ve tried a lot, and gotten turned down a lot. But this one, Tim’s got all the right tools. He’s had us get different certifications… so we’ve got someone now that understands the game, and he’s got us in line. The state’s looking at us, and then when they come up here, we’ve got the perfect spot. We’ve got road, river, and rail. You can’t beat that. Then we’ve got vacant land, and we’ve got available workforce. So that’s what I think brought it over the top.”

Carpenter said that in one of the meetings he was asked if the area had a workforce large enough to meet Braidy’s needs. He answered that he “could have them in the morning,” if they needed.

“We can have you 500 employees tomorrow,” he said. “And good employees. So I feel like that was the number one thing.”

Bouchard acknowledged that the experience of former steelworkers and others in the area was also a contributing factor in the choice to locate here, along with the transportation and regulatory factors.