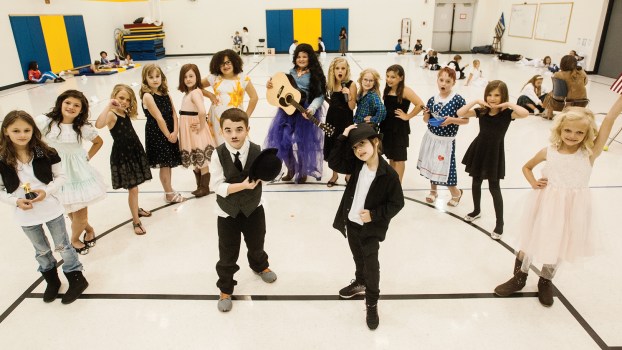 Students from Burlington Elementary School are dressed up as entertainment greats like Loretta Lynn, Charlie Chaplin, Dolly Parton, Lucille Ball and many others during the Living Wax Museum event. 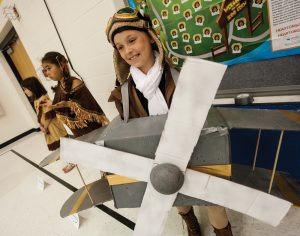 BURLINGTON — Students filing into the gymnasium at Burlington Elementary on Thursday got a chance to see history up close and personal.
Second graders from the classroom of Amanda Clay, Mary Matney and Courtney Tibbett took part in a living wax museum, on display for their fellow students.

Throughout the room, students were dressed as historical figures, such as Abraham Lincoln, John and Jackie Kennedy, Neil Armstrong, Leonardo Da Vinci with the Mona Lisa and Albert Einstein, posing silently and in full costume.

Classic presidents like Teddy Roosevelt were present, along with more recent political figures such as Barack Obama, Hillary Clinton and Donald Trump.

Some stood stoically, like Florence Nightingale with her lantern. Others, such as sport names like Jackie Robinson and Mary Lou Retton, assumed a triumphant  action stance, while, on the floor, Madison Wiseman, as Anne Frank, could be found writing in her famous diary.

Adyson Copley, 8, was one of two who chose to portray aviator Amelia Earhart, wearing  a full flight uniform and standing in a replica of her plane, the Electra, as part of her costume.

She said her mother and father helped her put together her look for the event.

“I chose her because she made me believe in what I can do when she tried to fly around the world,” Copley said of Earhart.

Maddy Blair was posed as Michael Jackson, standing in one of his signature dance poses.

“She knows every dance move of Michael Jackson,” Matney said of Blair’s excitement for the project.

He said that his mother and Beth, a relative, helped him come up with his costume.

“I picked him because I like his books,” he said.

“I like him because he’s a comedian and he made people laugh,” he said.

Copley said this was the first time the school had hosted the wax museum event. She said the idea came from a friend of hers at another school which had done a similar event.

“The caliber of the costumes is amazing,” she said, adding that it taught students that, in real life, all of the famous figures started out just like them.

Matney said the event tied into the “Now and Then” book the students have been reading in class.

“It’s about how people in the past can make an impact on the present day,” she said.

She said the students submitted three names of people they wanted to portray, which were then whittled down, so as not to have too many duplicates.

The children were then asked to research their character for a report and to work on a costume at home.

Tibbett said they told the students to study photos of their historical figure.

“We told them to look at their facial expressions and see how they posed,” she said.

The students did two presentations of the wax museum for sets of the school’s different classes, then returned later in the evening for an open house with parents, where each student would give a presentation on their choice, telling their story in the first person.

For more photos from the event, check out the Focus page in this weekend’s Tribune.

Speakers will talk about making better choices Ironton Mayor Katrina Keith will be having a town hall meeting on May... read more