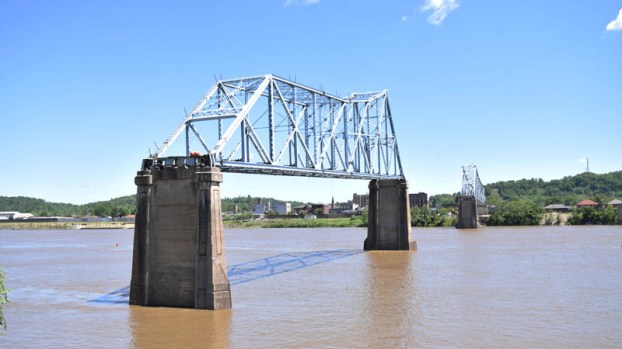 The approach on the Kentucky side of the Ironton-Russell bridge has been dismantled, leaving a freestanding section of the span in the river.

Old Ironton-Russell bridge is coming down

Safety zone to be set for tentative May 15 blast date

After 95 years as a familiar site across the Ohio River, soon the old Ironton-Russell bridge will exist only in memory.

Crews are set to dynamite the concrete piers of the bridge, built in 1922, in coming weeks, once the final steel sections have been removed.

According to a news release from Brayman Construction Corporation, plans for an explosive blast are set for later this month and a new, 1,000-foot safety zone will be established surrounding the structure.

The company said a second notice would be issued two days from the blasting date, which is tentatively scheduled for May 15 between 7:30-11 a.m., though the news release stated a firm date has not been selected as of this time.

On the day of the blast, police and fire crews will assist in evacuation efforts of the safety zone, ending in a final, door-to-door sweep in the zone and roads leading into it.

The company said the blasting poses a safety concern and advises all residents within the safety zone to relocate for the duration of the blasting.

Brayman, which constructed the new Oakley C. Collins Bridge that replaced the old span, has assumed ownership of the old bridge and is handling the dismantling.

The old bridge was closed to traffic on the afternoon of Nov. 23, 2016, following opening ceremonies for the new span.

The main span of the old bridge was cut loose and lowered to a barge for scrapping on Jan. 23. In the months since, crews have dismantled the remaining portions on each side of the river so the bridge’s steel can be recycled.

As of this week, the approach on the Kentucky side has been demolished and a freestanding section of the bridge, with the roadway removed, remains in the river atop the concrete piers. The Ironton section has yet to be severed from its approach.

Ironton Mayor Katrina Keith said the city has put in a request for one of the arches from the old bridge, to be preserved as part of a park or memorial.

The Ironton Farmer’s Market has returned with a grand opening on Saturday. Set in the Depot Square in downtown Ironton,... read more