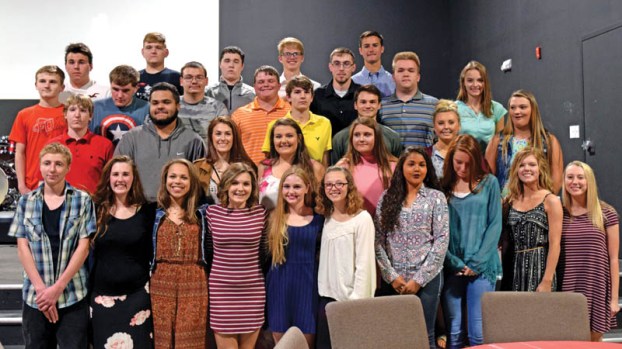 39 seniors from the Collins Career Technical Center STEM program were honored at a dinner Monday.

Hard work pays off for students

39 to graduate from Project Lead the Way

A dinner, catered by Texas Roadhouse, took place at Cross Community Church for the graduates, their family and faculty.

“We’re here to recognize the graduating seniors for their hard work and dedication over five years,” Matt Monteville, director of satellite operation for Collins, said. “It’s our way of saying ‘thank you’ to them and seeing them off. These are serious students, who are on their way to college. They’ve been accepted, the financial pieces are in place and they’re ready to walk in.”

The graduates are enrolled in PLTW courses at Ironton, South Point, Dawson-Bryant, Rock Hill and Chesapeake schools, beginning in the eight grade with an introductory STEM class, followed by a study of specialization in high school.

“You are the reason this program is successful,” he said.

He said PLTW courses in Lawrence County came about after Collins’ superintendent, Steve Dodgion, attended a statewide conference 14 years ago.

“Mr. Dodgion thought this could work in Lawrence County and decided to give it a shot,” he said, also noting that Collins keeps the classrooms updated with state-of-the-art technology. “This is a great example for the county.”

Dodgion said the program began nationally when 19 retired educators in New York came together, “perplexed” as to why they had trouble finding engineers in the United States.

“These individuals came together to create the program known as Project Lead the Way,” he said of the curriculum, rooted in science, technology, engineering and math.

He said that Lawrence County has been a particular success.

“We produce more engineers here than anywhere in Ohio,” he said.

Monteville congratulated the students for completing the program.

“The classes were fun, but they were also a lot of hard work,” he said. “You chose to push yourself and that says a lot about you.”

One graduate was Dylan Herrmann-Holt, of Ironton High School, who has been accepted to Kent State University to get an architecture degree.

“It’s been great,” he said of the program. “I’ve made great friendsships, learned teamwork and it’s helped me to decide my major.”

Mason Slagel, of Ironton, will be attending Vanderbilt University.

“It’s really cool,” he said of the program. “It teaches a lot of things that core classes do not.”

He said the program has allowed him to get dual credit classes for both high school and college, which may allow him to skip classes at the university.

After the dinner was served, Monteville presented each student with a backpack for college.

“This shows that, just because you graduate, we’re not done with you,” he said. “We’ll help carry the load and we’re always here if you need help.”

Beginning in the fall, the program will expand to an additional school district. Symmes Valley administrators voted this year to offer PLTW courses at the middle and high schools.

Relay for Life set for May 19