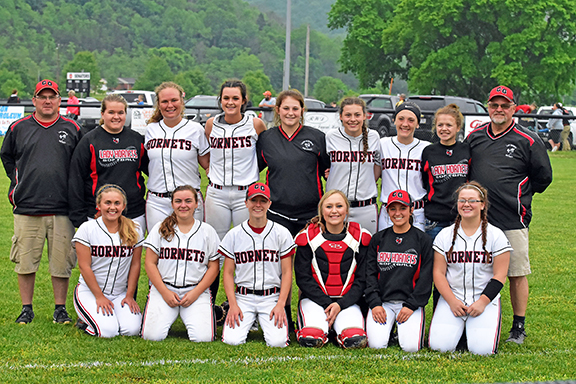 WEST PORTSMOUTH — It wasn’t a typical day for the Coal Grove Lady Hornets, but they’d take a lot more days like this one.

The Lady Hornets had a home softball tournament game but the rainy weather forced the game to be played at Portsmouth West.

The site didn’t matter as the Lady Hornets beat the Lady Senators 10-6 and with it came the school’s first-ever sectional championship for the 17-year-old program.

“It was a good game,” said Coal Grove coach Wayne Kellogg. “It was a big win for the program.”

“Portmsouth West is much improved from the beginning of the year when we mercy ruled them. But we got clutch hits all throughout lineup. The bottom of the order came through.”

West took a 1-0 lead in the top of the first when Taylor Coleman singled, moved up on a wild pitch, took third on a ground out and scored on the throw to first base.

Coal Grove came back with two runs in the bottom of the inning on a double by Kasey Murphy, a walk to Lauren Meyer, an RBI single by Lauren Crum and Mckenzie Moore’s RBI ground out.

The Lady Hornets (18-7) then erupted for seven runs in the fourth inning to lead 9-1.

Gracie Riley singled, Crum was hit by a pitch, Moore singled and Ali Waller had an RBI single. Amaya Waulk singled in two runs, Delaney Napier was safe on an error to score a run, a wild pitch plated Waulk, an attempted pickoff throw let Napier score, Murphy singled and Riley had an RBI single.

West rallied for three runs in the fifth.

Briana Bricker, Coleman and Daisy Holsinger all walked to load the bases. Maykala White was safe on an error to score two runs and Terra Butcher singled in a run.

Coal Grove got a run back in the bottom of the inning when Moore and Khylee Keaton reached on errors and Waller singled.

The Lady Senators final run scored in the seventh when Holsinger singled, White hit into a fielder’s choice and Butcher swatted an RBI double.

SAN FRANCISCO (AP) — After catching for 269 pitches and watching his beleaguered bullpen escape jam after jam in extra... read more