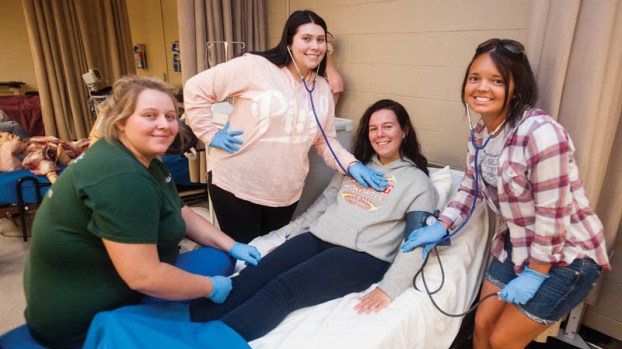 Class is first for program

GETAWAY — They said it was a challenge, but, on Friday, four students graduated from the first ever STEM LPN nursing class at Collins Career Technical Center.

“They come into the program their junior year,” Teresa Hall, a health academy instructor at the school, said. “And, when they turn 18, they are eligible to take the NCLEX exam.”

Knight, of Fairland, said the program was “very hard, because it’s nursing.”

She said she has wanted to enter the field since she was a child.

While enrolled at CCTC, she said, like the other graduates, she has worked as a student at King’s Daughter’s Medical Center in Ashland and Jo-Lyn Nursing Home in Ironton. She said she is set to attend University of Rio Grande following graduation.

Zirkle, of Fairland, agreed that the program was rigorous.

“But it was definitely worth it,” she said. It prepares you for the real world.”

Zornes, of Fairland, and Maddox, of Chesapeake, also spoke of the hard work they had put in.

“It was definitely worth it,” Maddox said.

She said she has been interested in nursing since beginning high school.

“It was challenging, but I like a challenge,” Zornes, who plans to work at St. Mary’s said.

The STEM LPN program is in its second year at the school.

Burlington students hear about different careers BURLINGTON — Students at Burlington Elementary got a chance to see the possibilities the... read more