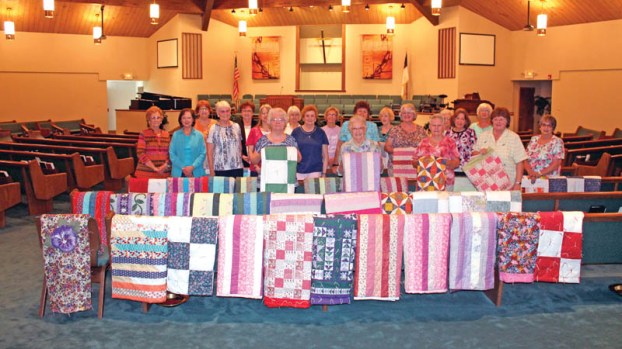 The Willing Workers, of the First Baptist Church of Proctorville, create quilts and other items for those in need. On Monday, the group delivered quilts to the Wyngate at RiversEdge.

Group makes a difference for others

‘Willing Workers’ create quilts for those in need

PROCTORVILLE — On Aug. 18, 2011, Janenne Smith, of the First Baptist Church of Proctorville, started a group of women called the Willing Workers, who create quilts and other items for people in need, as well as assisting with donations. The group started with about 10 members, and today contains 28 women who give their time and talents to those who need it.

Janenne’s daughter was the one who told her that she would be a great leader and to get women together to start the group.

Over the years, the Willing Workers have worked on numerous projects, creating quilts and other items for missionaries who travel to other countries as well as for local agencies, such as nursing homes and the City Mission.

The first project the Willing Workers took on was making pillowcase dresses, three-inch bandages from sheets, shorts, shirts and rag dolls for children in need in Africa. Another project was sending books, pencils, paper and money for food, as well as putting a roof on a shed, where someone lived in Jamaica.

Locally, the Willing Workers have assisted nursing homes, assisted living communities, the Ironton City Mission, Lilly’s Place for drug-addicted infants, Birth Right for un-wed mothers, those who are homeless, and other churches, as well as the First Baptist Church of Proctorville. On Monday, the Willing Workers delivered quilts to the Wyngate at RiversEdge.

Some of the items the Willing Workers have made since the group began include crib sheets, cloth diapers, crochet hats of all sizes, quilts, blankets, lap throws, bibs, wordless Bibles for children, bracelets, door decorations and more.

“The Lord has provided us with all the needed materials for all of our projects through donations from our church family and others here at the First Baptist Church of Proctorville,” Sharon Adkins, member of the Willing Workers, said. “We give thanks to the Lord for all these women who have worked these past six years. And especially for Janenne, who has been our rock.”