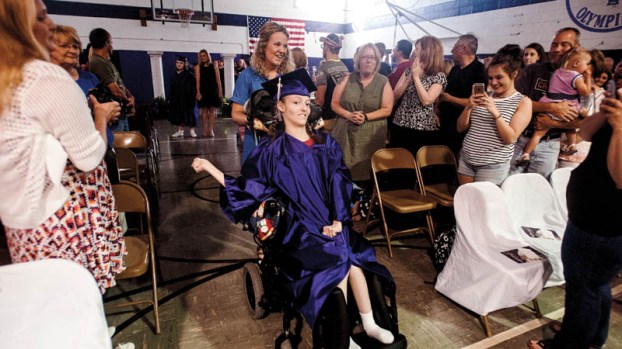 Six Open Door School graduates received their diplomas Tuesday evening, and are looking forward to what the future holds.

“This is a great group of kids,” Kendra Heim,” Open Door School principal, said. “They’ve all worked really hard to get here tonight, and they’re excited to move on and start their careers after high school.”

Heim added that most of the graduates would either begin at Person Centered Services and/or Easterseals following their time at Open Door School.

The graduation ceremony began with a processional to “Pomp and Circumstance,” which was followed by the Pledge of Allegiance and an invocation before Heim gave a welcome to the crowd inside the school’s gymnasium.

A performance by the Open Door School bell choir followed, in which Pratt and Gresham were a part of for the last time, before a slide show of the graduates was played.

“Every class is unique,” Paul Mollett, superintendent of the Lawrence County Board of DD, said. “As I was driving here tonight, I was thinking about how proud we are of these graduates and how proud their parents must be. These students have faced a lot of obstacles that most students have never faced.”

As the ceremony continued, the graduates turned their tassels before Heim presented each of them with their diplomas. A recessional to “Pomp and Circumstance” concluded the ceremony, which was followed by light refreshments of cupcakes and punch.

“We want them to live happy, fulfilled lives,” Mollett said. “And this is where that begins.”