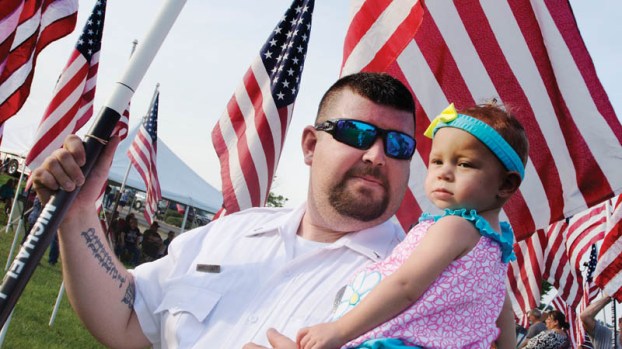 Flags of Honor begins next weekend

Will be on display until after parade

The Ohio Flags of Honor tour will continue its tradition of being set up at Ironton Hills Plaza next weekend, with the opening ceremony kicking off at 6 p.m. Friday.

Approximately 300 flags honoring service men and women who gave their all defending our country and freedom will be placed at the opening ceremony, which will then be on display until after the Ironton Memorial Day parade.

The Ohio Flags of Honor Foundation originally began as the Operation Iraqi Freedom Chopper Fund (OIFCF) by Gino and Lisa Zimmer, the parents of U.S. Army Specialist Nicholaus E. Zimmer, who had been killed in Kufa, Iraq. Gino and Lisa found out about the death of their son on Memorial Day in 2004, and through the tragic loss and the gratitude they felt for the overwhelming support of veterans motorcycle clubs and organizations in attendance at the funeral, the OIFCF was established as a non-profit.

In September of 2005, Ohio was notified that the U.S. Marines from Lima Company 3rd Battalion/25th Regiment were returning from assignment in Iraq after suffering heavy losses during the eight months they were on assignment in the Middle East.

With 16 of the 22 killed in action being Ohio Marines, the state wanted to honor the Lima Company.

An American Legion post set up an “Avenue of Flags” at Rickenbacker Field, south of Columbus, to be flown in honor of those who would not be returning. Other veteran organizations also displayed “tribute” flags separately.

Following the success of the “Avenue of Flags” at Rickenbacker Field and requests for the display to be toured throughout the state for others to see, the OIFCF was contacted by organizers of the flag display, where it was decided that the OIFCF would have more of an impact by focusing on Ohio’s fallen soldiers through the “Ohio Flags of Honor” memorial tribute.

The Kentucky VIII Chapter of the Blue Knights is a non-profit fraternal organization comprised of both active and retired area law enforcement personnel who enjoy the common bond of riding motorcycles. The chapter pays for the flags to be brought in for display through donations, which are then all given back to the Ohio Flags of Honor Foundation.

The Ohio Flags of Honor display is a way for the foundation to help facilitate fellowship for families, friends and communities who want to pay tribute to Ohio’s fallen soldiers as well as raising public awareness and support for Ohio’s returning veterans.

The display will be taken down following the Memorial Day Parade on Monday.

Defining the mission and outreach