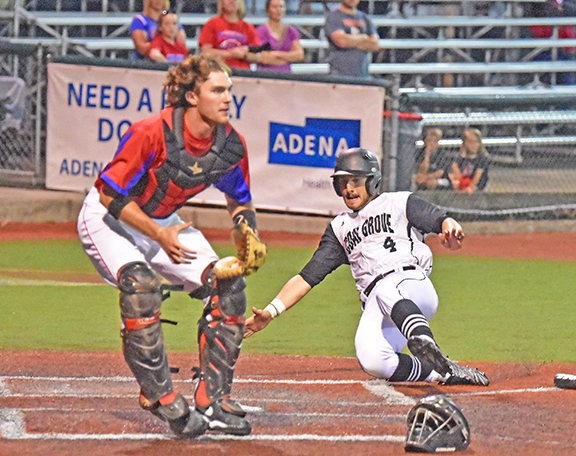 CHILLICOTHE — The dreary, rainy weather said it all.

The sun never could find its way to shine on the Coal Grove Hornets who couldn’t find any luck on their side in a 6-2 loss to the Zane Trace Pioneers in the Division III district semifinals on Friday night at Paint Stadium.

Each team had six hits but three errors, walks and bad breaks proved too much for the Hornets to overcome.

Despite the loss, Daniel Rutherford was dominating in a relief role. He came on in relief with one out in the top of the third inning and struck out 10 in 3.2 innings. He allowed two hits and one unearned run.

“That’s the best I’ve seen Daniel throw. He was throwing hard and he was throwing strikes. He was in a good rhythm,” said Hornets’ coach Dean Mader.

The Pioneers got a strong performance from Jeremy Brooks who struck out 10, walked one and hit a batter in going the distance for the win.

Zane Trace scored three runs in the top of the first inning.

The Hornets came back to score a run in the bottom of the inning when Rutherford walked and Jeb Jones and Dylan Malone both singled.

The Hornets left the bases loaded in the inning.

The Pioneers got two runs in the third to lead 5-1.

Ryan Winans was hit by a pitch and McCorkle tripled for a run. Tanner Congrove then singled in a run.

Coal Grove scored a run in the fourth to trail 5-2.

Malone, Darin Bloomfield and Jordan Case all singled to load the bases and Zac Landers reached on an error as the run scored.

The Pioneers added an unearned run in the sixth when Rittenhouse walked, stole second, took third on an error and scored on a passed ball.

Malone was 2-3 as Coal Grove had six hits. Six different players had hits for Zane Trace.

Coal Grove ends the season 15-7 with an Ohio Valley Conference championship and a sectional title as part of their success.

“I’m not going to dwell on this game. This is one of the most successful groups in baseball that we’ve had,” said Mader.

“They won our first league title in 25 years, we won two sectionals and made two district tournaments. This is a fun group to be around. They love baseball.”

Zane Trace (20-10) beat Minford on Saturday in the district finals.

CINCINNATI (AP) — Alexi Amarista was a good fit for the Rockies because he can play any position. In one... read more