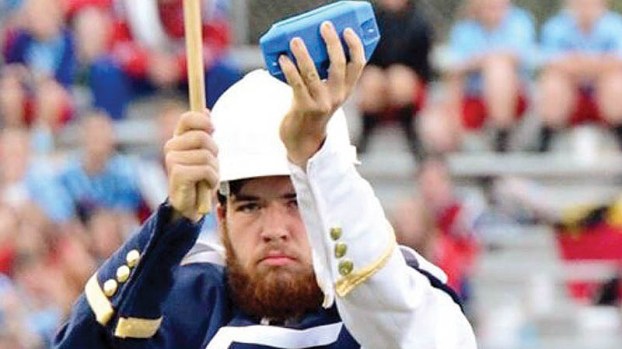 submitted Kyle Goodson rocks the woodblock during a performance with South Point High School Marching Band. He is one of six Lawrence Countians to join a DCI drum corps after graduating high school.

DCI gives musicians the chance to perform at the next level

When you think of music in Appalachia, you might think of notable country or bluegrass acts. Folks like Keith Whitley, Bobby Bare, the Judds, Billy Ray Cyrus, or Jason Carter might come to mind.

But Appalachia isn’t all banjos on the front porch and guitars at the honky-tonk. Music education programs here are robust, especially in Lawrence County where local high schools are sending no fewer than six individuals, students and alumni, to participate with five different corps in Drum Corps International competitions this summer.

Shelby Dalton, a 2016 graduate of Rock Hill, currently pursuing math education at Shawnee State University, will join Chesapeake High School’s Chris Pauley with Spirit of Atlanta. Dalton will play percussion in the battery while Pauley will participate in the color guard.

Chesapeake will also send 2016 graduate Tanner Catalonga to march with the Pioneers.
South Point is sending two students as well. Hunter Blake will be marching with Carolina Crown, while South Point alumnus and Morehead State University student Kyle Goodson, who is pursuing a degree in music education, will march with the Cadets.

Logan Zerkle, a 2016 graduate of Dawson-Bryant currently attending Ohio University, will march with the Bluecoats, out of Canton, Ohio, one of the premier organizations in Drum Corps International.

Dalton explained that she became interested in drum corps back in high school, because of her percussion instructor, but that she became even more interested after realizing how much she missed the experience after starting school at Shawnee State University, which doesn’t field a marching band.

“In high school, my percussion instructor, Clark Littlepage, was in the Seattle Cascades,” Dalton explained. “He always told us how great of an experience it was, and that’s kind of what kick started my interest in the DCI drum and bugle corps.”

“I knew Shawnee didn’t have a band, which was disappointing,” she continued. “But that got me looking toward going into a drum corps of some kind. So I tried to get lessons from anyone up at Marshall or Morehead.”

She ended up getting lessons from someone in Morehead who introduced her to Spirit of Atlanta.

“It’s worked out really well,” she said. “It’s an eight hour drive, but it’s well worth it and I probably wouldn’t have gone anywhere else.”

She said that she clicked with the folks at Spirit right away, and that their way of motivating their performers, with constructive criticism and positive feedback, really appealed to her.

She said that hundreds were there to try out, and that around 20 other folks tried out for the front ensemble alongside her. Her practice and long hours paid off however, as she was awarded a spot playing vibraphones.

“I spent hours upon hours here in the practice room at Shawnee,” she said.

It’s definitely a more intense experience, all the way around, than marching band, she explained.

“I was prepared musically,” she said. “But I wasn’t mentally prepared for what was about to happen.”

“It’s strenuous. They push you to your limits, just to see what it will take for you to break. But they never really put you down. They would always… build you up.”

She said that although she is studying to become a math teacher, she can’t imagine her life without music, and that she hopes to use the strong correlation between math and music to help motivate and interest her students in her future career.

Goodson, who will be marching with the Cadets, is also studying to become a teacher, but his focus is on music education, a field that Morehead University excels at.

“Everyone down there is top-notch level,” he said. “It’s just a great program. It’s definitely an education focused music school.”

While there is a performance aspect, he explained, “it’s different than a conservatory where people usually go to do orchestra stuff… (marching band is) definitely something we enjoy.”

Goodson is also in the front ensemble where he will be playing “mainly synthesizer” but will also play some vibraphone and auxiliary parts like bass drum.

He has been a percussionist since sixth grade, he said, when he chose band over a math enrichment class.

“I first learned about Drum Corps International probably around 2011,” he said. “It was my first year of marching band and the director had showed us some videos online, and then we went to a show in Charleston, and it was just amazing. It’s like professional, top- notch marching bands.”

He watched “probably hundreds of hours” of DCI bands on YouTube before trying out this year.

He explained that they go for spring training beginning this weekend, and practice for “about a month” before their first show on June 21. They will then tour until world championships on August 12.

Chris Wyscarver, band director at Chesapeake High School, said that he isn’t surprised that so many students from Lawrence County are participating with DCI corps this year, because the county has several top-notch marching band programs. Drum corps, he explained, is the next logical step for anyone who excelled at marching band and isn’t ready to call it quits.

“It’s a whole other step above high school,” Wyscarver said. “It’s kind of like minor league versus major league.”

This area is particularly good at grooming kids for that experience, he said.

“It’s interesting, because it’s something we talk about at OMEA, the Ohio Music Educators Association,” he said. “This area, which is District 17, from Minford all the way over to Athens, we are the second highest adjudicated events area in the state of Ohio. Most people don’t think much music happens south of 70, and we prove them wrong. It’s just a very unusual group of highly educated students and teachers that really care and that really push the marching arts, as well as the concert arts.”

He said that better social media presence and videos shared online have also helped advance the popularity of drum corps.

“Once you see that, even non-music people, you’re hooked,” he said. “It’s a great show.”

The DCI marching season will end with the World Championships, at Lucas Oil Stadium, in Indianapolis. But the experiences and the memories the participants will make, and bring home, will last a lifetime.

Update – The Boil Water Advisory issued by the Village of Coal Grove has been lifted, effective Monday, May 22,... read more