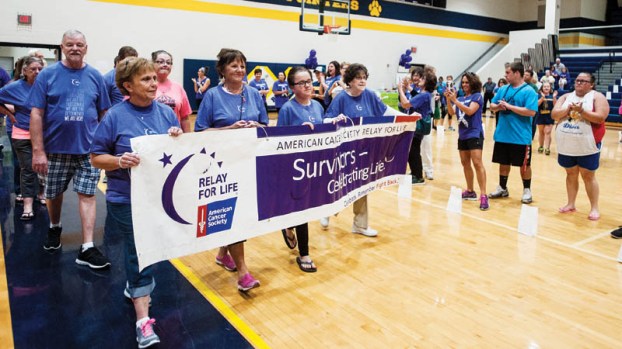 Participants in the annual Lawrence County Relay for Life event start the evening off with the Survivors Lap around the South Point High School gymnasium.

“The biggest thing is survivor recognition,” she said. “We honor the survivors and their caregivers.”

She said the event kicked off with a survivor lap and, following that, a dinner was held for the group, with food provided by South Point Giovanni’s and desserts by South Point Walmart.

“It’s a place for people to heal and to celebrate winning their battles,” she said.

She said a luminary walk with lighted bags takes place later in the night.

The relay rotates locations each year. Last year’s event took place at the Lawrence County Fairgrounds. This was its second visit to South Point, Nichols said.

The teams who registered to walk laps in the school’s gym were from Brickhouse Cardio of Proctorville, South Point Walmart and Valley Health.

In addition to the track, the event hosted a vendor fair, featuring about a dozen booths, and Zumba.

“We really couldn’t do this without the support of the local community,” Nichols said.

She said all funds raised would be used by the American Cancer Society, primarily for patient services, research and advocacy, and that those who would like to make a donation to the effort can go to http://www.relayforlife.org/LawrenceCounty.