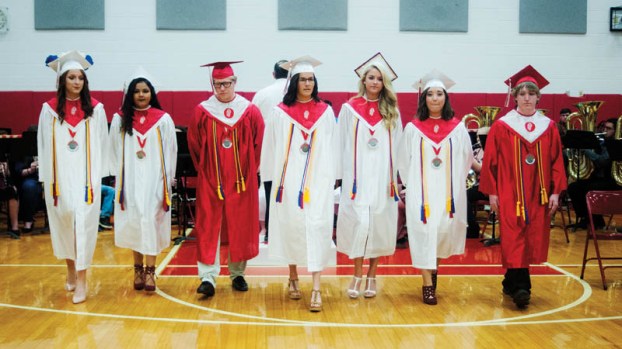 The Rock Hill class of 2017 took the final step of their high school careers Saturday, receiving their diplomas at the school’s 67th annual commencement.

Family and friends packed the gymnasium for the ceremony, and to see their graduates walk across the stage.

“It was hard, but it was great and worth it,” graduate Emma Bare said of her time at Rock Hill. “I wouldn’t have wanted to go to another school, and I’m so glad that I went to Rock Hill”

For Trevor McCormick, his favorite part about Rock Hill was the teachers.

“The teachers at Rock Hill are very considerate, not just how they taught us, but how they have prepared us to continue into the future as well,” he said. “It wasn’t just a math lesson, or history or English lesson, but they also made it about life lessons.”

McCormick was involved in numerous activities during his time at Rock Hill, including both the marching and concert bands, bowling team, baseball team, science and Spanish clubs, prom committee, show choir and theater club.

Ben Miller agreed that the teachers at Rock Hill made his experience a lot better.

McCormick has plans to attend Collins Career Technical Center’s nursing program, and said he wants to become a nurse in the mental health field. Miller said he plans on studying audio reporting, although he is still undecided on where.

The school’s concert band provided the music at the ceremony, playing “Pomp and Circumstance” as the graduates made their opening procession.

The ceremony began with a Pledge of Allegiance, invocation and National Anthem, before Honor Student and Class President Brady Knipp gave a welcome.

Knipp talked about the class beginning a new chapter in their lives, while leaving behind their footprints at Rock Hill.

A video presentation, created by the school’s digital media class, of the class of 2017 followed before several Honor Students spoke.

Remarks by Superintendent Wes Hairston and Principal David Hopper continued the ceremony before the class received their diplomas, marking their final accomplishment as Redmen.

Students relive day in the life of Jesse Stuart

COAL GROVE — Students in grades 3-5, from the Dawson-Bryant Elementary Enrichment Program, participated in events last Monday to give... read more