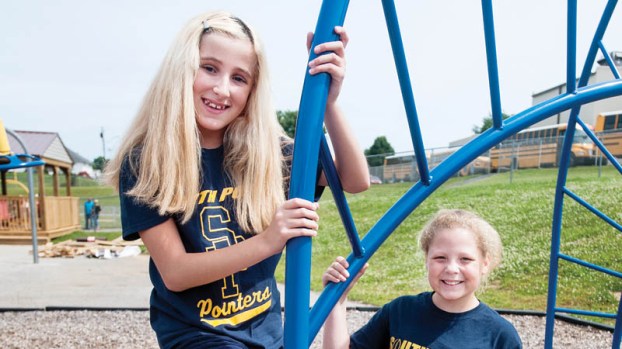 South Point Elementary students Madi Smith and Nastasia Pegram got to rule the school after writing essays. Smith was selected as the administrative assistant and Pegram got to be the principal.

Trading places for a day

SOUTH POINT — Many fifth graders applied for the position, but Nastasia Pegram got the job.

Citing her good organizational skills and the fact that she is a motivator, she composed an essay explaining why she should be principal-for-a-day at South Point Elementary.

In her piece, Pegram explained the need for order at the school.

Her essay was submitted, along with others from her class, when principal Chris Mathes and administrative assistant Bill Christian decided to open up their jobs to the students for one day at the end of the school year.

Peagram earned the top job from nine finalists, while her classmate, Madi Smith, took the position as assistant.

Smith wrote in her essay that she had good leadership skills and “would be helpful to grow and be obedient.”

Christian said Peagram was chosen as principal because of her pitch to be “a motivator.”

“I would motivate kids to be ready for their state tests,” Peagram wrote. “If kids are feeling down, I will start their day off right and, on the intercom, I will do funny jokes and do a thought of the day that is really inspiring.”

Smith, he said, impressed them with her goal to be “a role model.”

“One way I could be a role model is by building a build system,” she wrote. “A build system is teaching a student how to solve problems. Another reason is because I’m determined to see students succeed and have fun while doing it!”

After their selection, Christian said the two students shadowed him and Mathes for the day, and got a chance to see what is involved in their jobs.

“They were surprised how much we do,” he said. “They helped with the science fair, getting ready for field day and handled two lunches.”

Peagram recalled some of the activities they did.

“We did the announcements, they had me put papers in 25 folders and fold 429 Party on the Hill T-shirts,” she said. “I also did recess.”

Smith said she took part in the science fair and helped the judges and assited on recess.

“They gave me a whistle and a name tag and had me make sure everyone was at level red on lunch, in a straight line and quiet,” she said.

Christian said the students were surprised that, in the position, they did not get to have lunch until 1:30 p.m., late in the school day.

“We told them ‘This is when we get to eat lunch,’” he said. We treated them to pizza. They said they told us that we’re much more busy than they realized.” Christian said, in selecting the winners, he and Mathes looked for someone who grasped the job, rather than just making promises.

“A lot of them will say they want to give everyone a free popsicle or something like that,” he said. “We looked for someone who understood what it really means to be a principal, and they did.”