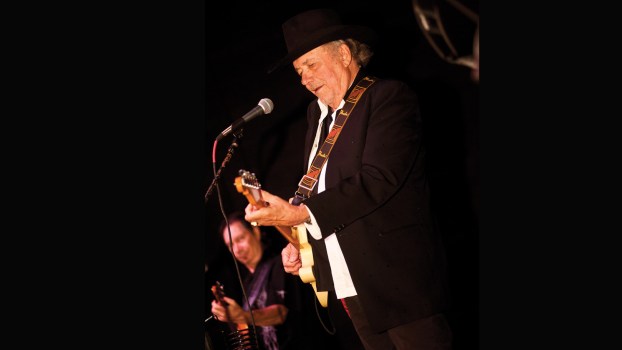 NASHVILLE — Country Music Hall of Fame member Bobby Bare, 82, has been in the music industry for 55 years and, when it came time to title his new album, being released today, he based it on what he says is a constant — that “Things Change.”

The Ironton native said the idea came to him from his friend, the late Hoyt Axton, a singer-songwriter known for penning hits, including Three Dog Night’s “Joy to the World” and for acting in a number of television shows and films.

“Hoyt used to say, ‘I’ve learned three things — cowboy hats blow off in the wind, women rule the world, not men and things change,’” Bare said of his friend’s observations.

He said Axton, in ill health, was living with his mother in Henderson, Tennessee in the weeks before his death in 1999.

“I would go over there all the time and cook him a big Ironton breakfast of biscuits, sausage and gravy,” he said.

A few years later, he said Axton’s words began to resurface in his mind.

“I got to thinking about what he said,” Bare said, adding that he went into the recording studio and began to sing the words in a D minor and the song took shape.

“We wrote it fairly quickly and it turned out to be a good song,” he said. “A song like that has a lot of wisdom in it. An old guy like me is supposed to have a lot of wisdom rolling around in his head somewhere.”

Advance reviews of the album, Bare’s 38th and first in five years, have been overwhelmingly positive. Among the highlights is “Trophy Girl,” which he co-wrote with Guy Clark before his death last year.

“I think he is one of the coolest songwriters I’ve known,” Bare said. “This is the last thing he and I wrote together.”

Bare reflects on the years in “Where Did It Go?” which he wrote by himself while working the Hardly Strictly Bluegrass festival in San Francisco. He said the lyrics to the song, which features his son, Bobby Bare Jr., came to him at the hotel.

“I wrote them down on the slip they give you to hang on the door to order breakfast,” he said.

His remake of one of his signature songs, “Detroit City,” is a duet with Chris Stapleton.

“I’ve been friends with Chris for a long time,” he said. “He’s so talented.”

Bare said Stapleton is not your typical kind of country star.

He said Stapleton had been underappreciated in country music until he acquired an unlikely fan in pop star Justin Timberlake, who invited him to California to perform at a party, which then led to the two doing a duet on the Country Music Awards.

“That was a magic moment,” Bare said. “They’d give their left leg to get Justin Timberlake on the CMAs. Chris was able to swing that.  It was Justin’s idea for a duet and after that, Chris just exploded.”

Bare said he asked Stapleton to duet on the new album.

The video for the title track shows Bare trying out guitars at a Sam Ash store near Nashville and features cameos from Tanya Tucker, Randy Owen of Alabama and Hank Williams Jr. One guitar in the video, an old, well-worn acoustic model, which he jokingly considers trading in, has a special significance.

“The guitar I play in the video was Shel Silverstein’s,” Bare said of his friend and frequent collaborator, who died in 1999 and whose name is visible on the instrument’s head. “Nobody knows what kind it is, but people will tell you it’s one of the best in Nashville. It had a broken string and they put me on a new set of strings.”

Recent years have seen a resurgence in classic country and a younger generation taking an interest in recording of artists like Bare.

When asked to choose which of his albums would best serve as a starting point for new listeners, Bare said he would direct them to 1973’s “Bobby Bare Sings Lullabys, Legends and Lies.”

“It’s the most representative of what I do,” he said. “It has the best work of Shel Silverstein and, plus, it has three hits on it.”

Bare, whose catalog includes a mix of original compositions, collaborations and covers, said he knows a classic song immediately upon hearing it.

Of “Detroit City,” he said he remembers exactly where he was when he heard the original version by Billy Grammer for the first time on his car’s radio.

“I tied up traffic for three minutes, thinking ‘That is the greatest song,’” he said.

Bare said when he hears a good song, “It’s like time stops for you.”

Likewise, he said the memory is forever imprinted on him when he first heard a recording of Hank Williams’ “Long Gone Lonesome Blues,” a song which had a profound influence on him.

“I had been to Ironton and I was hitchhiking my way,” he said. “I could take you back to the exact spot on the road where I heard it. When you hear a great song, it’s life-changing. You remember exactly where you were.”

Bare said, while he does not plan to hit the road for the new album, he will be doing some performances to promote it.

“I’ll do some shows,” he said. “If they want to fly me to New York to be on one of the TV shows, I’ll probably do it. Just not an extended tour. I’m done with that.”

Bare’s plans for the rest of the year include some festivals, dates in Texas and playing the Opry, as well as giving the induction speech when his friend, the late Jerry Reed, is inducted into the Country Music Hall of Fame later this year.

Bare and Reed, along with Mel Tillis and Waylon Jennings, formed the supergroup Old Dogs and released a two volume set of Silverstein-penned songs in 1999.

“That’s my 40 to 50-year fishing buddy,” Bare said of the legendary guitarist and ‘Smokey and the Bandit” star whose induction has been long-sought by fans. “We’re all happy about that.”

Bare said he keeps tabs on his hometown of Ironton and said a friend had just sent him pictures of the demolition of the city’s 95-year-old bridge to neighboring Russell earlier in the week.

While he doesn’t have immediate plans to visit, he said he hopes to soon and to “send my love” to folks back home.

“They’ll always have a special place in my heart,” he said.

“Things Change” arrives in record stores today from BFD Records and is available for $15 from www.BobbyBare.com. Copies ordered through the website will be autographed. Bare has provided The Tribune with this exclusive video, where he discusses the writing of “Where Did It Go?”:

Bones and Brews festival this weekend

Event will be at Depot Square in Ironton For foodies look for something to do this weekend, there will be... read more