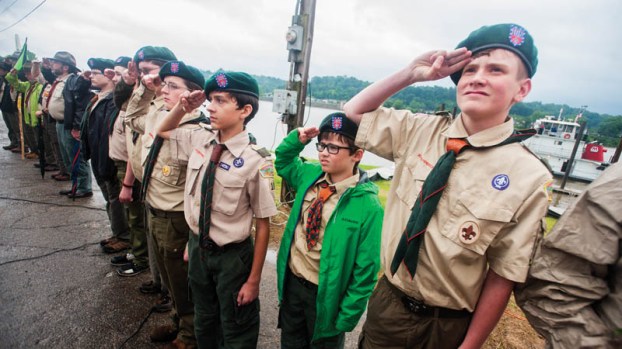 Ironton Boy Scout Troop 106 salute during the posting of the colors at the annual Navy Night at Center Street Boat Landing in Ironton.

Lawrence County Common Pleas Judge Charles Cooper MC’d the event, and led off the evening giving a welcome to the crowd.

“This is the first public event of the Memorial Day holiday, which commemorates the armed forces of the United States and all the servicemen and women who gave it all serving this great nation,” he said.

The event continued with Matthew Gossett giving an invocation and Adam Fleeman singing the national anthem with his acoustic guitar.

Ironton Mayor Katrina Keith then thanked the community for coming out to the event, recognized all of the veterans and fallen servicemen and women, saying their sacrifices don’t go unrecognized, and proclaimed the day as Navy Night in the city of Ironton.

Lori Donahue continued the event with the playing of “Armed Forces Salute” on the keyboard, leading into the event’s keynote speaker, Lt. Cmdr. Kurt Brandstaetter, USCG.

Brandstaetter began his speech thanking the city of Ironton and all who were involved in putting Navy Night together.

He then spoke about the impact other servicemen and women, as well as veterans, have had on his life, his family being a legacy military family, the true meaning of courage and bridging the gap between the military and civilians.

Boy Scout Troop 106 conducted the placement of the wreath, with the assistance of Marathon Marine Transportation and Lawrence County Sheriff Marine Patrol, and Ironton VFW Post 8850 concluded with the dismissing of the colors.