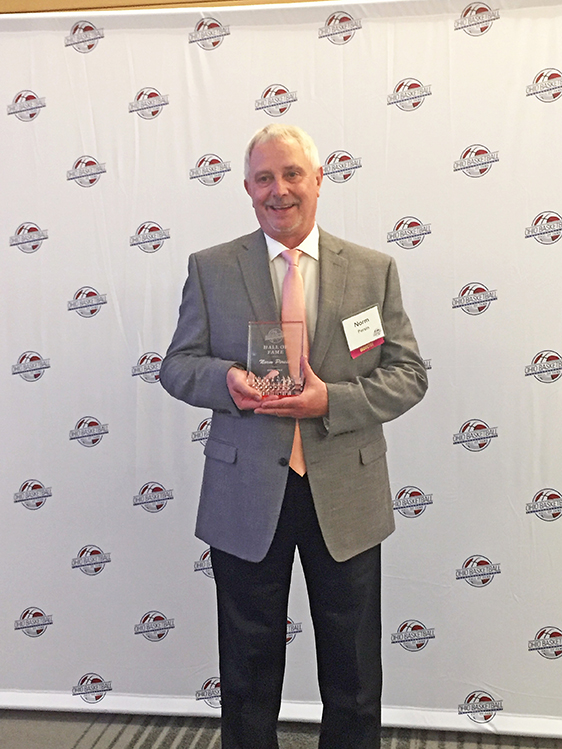 Coach Norm Persin is all smiles as he holds his Ohio Basketball Hall of Fame Award. (Photo Submitted)

COLUMBUS — The list of accomplishments on Norm Persin’s resume’ might stretch from one foul line to the other on a basketball court.
But Persin’s most recent honor has turned out to be the game winner.
Last Saturday, Persin was inducted into the Ohio Basketball Hall of Fame as a member of the 2017 class of basketball legends in the state.
“Never in my wildest dreams did I ever image something like this happening. This is truly a great honor,” said Persin.
This year’s class included 14 former players, four coaches, two teams, two officials and one contributor. The 2017 class consists of: Ron Bonham, Jerry Carder, Jim Carder, Jim Chones, Johnny Davis, Mark “Buzzy” Davis, Fred Foster, Bob Hamilton, Cheri Harrer, Richard Kiser, Jantel Lavender, Carol Madsen, Buddy Mayborg (official), David Nash (official), Ann Meyers, Mel Riebe, Charles Share, Eugene “Middie” Smith, Hank Stein and Craig Taylor.
Persin reflected on 2006 inductee Oscar Robertston who led the University of Cincinnati to two NCAA titles, the Milwaukee Bucks to an NBA crown and is a member of the Pro Basketball Hall of Fame.
“I grew up idolizing Oscar Robertson and was able to spend time with him last year and now I have been honored with him. I’m speechless,” said Persin.
Persin graduated from Warren Harding High School in 1968 and the University of Rio Grande in 1973.
Persin has been coaching high school basketball for 40 years including 21 years at Chesapeake, 15 during two stints at Oak Hill and two years at Wilmington.
During that time Persin has racked up a record of 708-200 including the 2009 National Coach of the Year after he guided the Oaks to the Division IV state championship.
He is currently No. 3 on the boys’ all-time win list and is first among active high school coaches with a winning percentage of .780.
“After 700 wins and 40 years of coaching, the question always is asked how much longer will I coach. My answer is, ‘until it is no longer any fun to coach or if I get close to (Pickerington coach Pete) Liptrap’s 263 losses,’” Persin said with a laugh.
He began as an assistant at Gallipolis and then was head coach for five seasons at Oak Hill where he won an Ohio Valley Conference title. He coached two years at Wilmington and then returned to the OVC as the Chesapeake Panthers head coach.
His success at Chesapeake included two Associated Press poll championships with back-to-back 20-0 seasons. Chesapeake has since named the basketball court in his honor.
Persin returned to Oak Hill 10 years ago to work closer to home. He was inducted into the Ohio High School Basketball Coaches Association Hall of Fame in 2016. He is also a member of the Warren, Chesapeake and Ohio Athletic Directors hall of fames.
Persin praised the work of Don Henderson and Doc Daugherty who were members of the coaches’ association and went against the doubts and made the Ohio Basketball Hall of Fame a reality.
“Many coaches in our association did not think it was possible. Don Henderson and Doc Daugherty thought otherwise and it became a great tribute,” said Persin.
Among the celebrities in attendance were West Virginia coach Bob Huggins, former Ohio State coach Larry Hunter, Rio Grande coaching great Earl Thomas and former Gallipolis coaching great Jim Osborne.
One of the featured speakers was former Ohio State coach Randy Ayers.