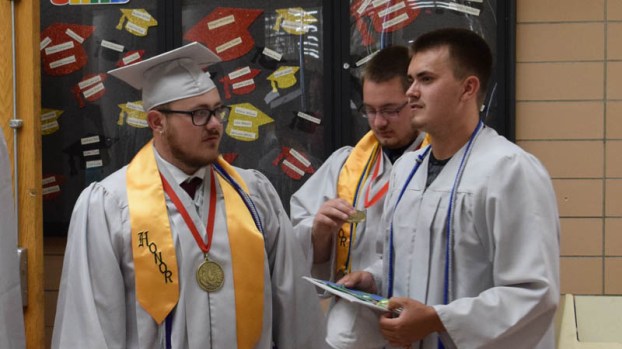 Nearly half of class graduates with honors

But whether they graduated with honors, plan on attending college or trade school, or just want to see the rest of the world, the graduates all said they were ready to move on to whatever comes next, even if finishing school was, as graduate Sydney Gallion described it, “bittersweet.”

Gallion, who is going into cosmetology and plans to work as a Mary Kay consultant as well, said that she had a mixture of feelings about life after school.

Blake Clark, an  honors graduate who plans to study diesel mechanics at UTI, and would then like to come back home to work for CSX or another company with local offices, said that he was “both sad to leave, and excited.”

Anthony Christian said that we was both sad and excited as well, but he is looking forward to continuing his education at Collins Career Technical Center, where he would like to focus on a career as an electrician.

Kyle Matusiewicz said he was excited to finish, but he wasn’t sure what his next steps were.

Julie Myers, who graduated with honors, said she didn’t know what her next steps were either, but that she was excited to finish school and was looking forward to moving outside the area and seeing more of the world.

But before she starts studying again, she said, she’s going to take a much-earned rest.