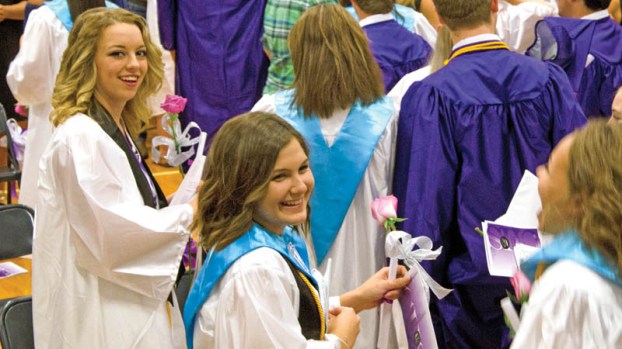 More than 90 graduates made their way down the aisle, under a banner of “Welcome to the Jungle,” part of a class that principal Chris Smith said displayed leadership in more ways than one.

“They’re a great group,” he said. “And for even more than their academic side. They’ve done great community service.”

First was Caleb Darnell, the son of John and Ellen Darnell. A member of the National Honor Society and National Beta Club, he was chosen for Best of the Class by WSAZ.

Jozy Marie Jones, the daughter of Jeff and Jill Jones is also a member of the Honor Society and Beta Club and was the school’s second representative for Best of the Class.

She plans to attend Xavier University in the fall, where she will major in biology.

Third was Darby McCloud, the daughter of Steve and Melissa McCloud, also a member of the Honor Society and Beta Club and named Best of the Class. She was also selected for the Chesapeake High Senior Salute. She plans to attend Marshall University and will major in pre-pharmacy.

The three honor graduates were inducted by Smith before giving their speeches, following a performance by the school’s band and choir.