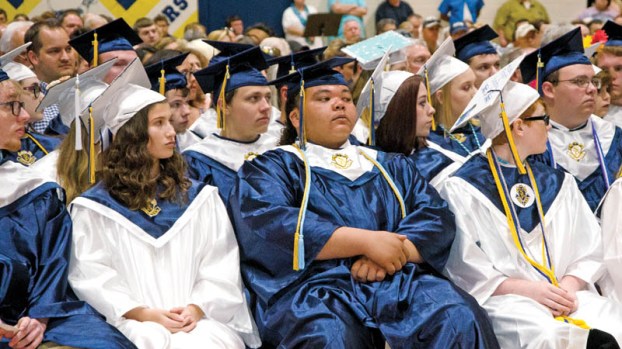 SOUTH POINT — On Sunday, 99 South Point seniors said goodbye to high school and moved on to the next step in their lives.

“They’re a fantastic group of kids,” he said. They’re one of the best to come through here.”

One of the school’s valedictorians is Jakob Helton, the son of Scott and Kelli Helton, who is graduating with 4.0 GPA and will be attending Princeton University in the fall to study astrophysics. He has received the AP Scholar with Distinction Award, scored a 35 on his ACT and tied the all-time season record for goals in soccer.

The third of the co-valedictorians is Christopher Tatlonghari, the son of Susan and Expedito Tatlonghari. In addition to serving as senior class vice president,  he was the secretary for Mu Alpha Theta, a member of Rho Kappa, captain of SPHS varsity soccer and played as center defender for the team. He was also captain of the school’s track team. He plans to attend the University of Cincinnati and major in computer science.

The salutatorian of the school is Caleb Pennington, who served as senior class president and scored a 35 on the ACT. As the second student accepted into an Ivy League school for the year, he will be attending the University of Pennsylvania to study economics and finance at the Wharton School of Business. The son of Andrea and Todd

Pennington, he was a member of Mu Alpha Theta, Rho Kappa and the SCORES team and played soccer, track and basketball. He is a national AP scholar with Honor.

Coleman said the graduating class had received more than $1 million in scholarships.

“They’re a great group of kids to have and they’re great leaders for the community,” he said.

CHESAPEAKE — Chesapeake High School hosted its graduation on Sunday. More than 90 graduates made their way down the aisle,... read more