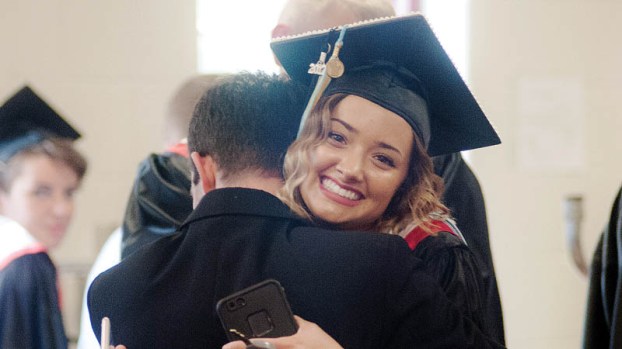 Molly Saunders receives hugs and well wishes from a friend before the start of the 2017 Dawson-Bryant High School commencement exercises Sunday.

Dawson-Bryant graduates take the next step

Alexa Dickerson, National Honor Society Member who graduated with honors with distinction, tech prep and college prep recognition, and received the State of Ohio Diploma with Honors, said that she was excited to continue her education and move into her field. Dickerson said that she will, “go to Marshall to study diagnostic medical sonography.”

Jacob Clark, who graduated with college prep recognition, said that he was “excited” for his next steps as well.

“We’ve been waiting a long time (for graduation),” Clark said, “and have a big future ahead of us.”

Clark’s “big future” includes going to work on construction projects with his father, working out of North Carolina as well as on projects in Washington D.C.

Brandon Neff, who graduated with tech prep recognition as well as with a patch for American Marching Band Tuba, said he plans to attend Marshall where he will double major in music and computer science, bridging the gap between the arts and technology.

But whether they plan to attend college, go into a trade or technical school, pursue the arts, or jump straight into the job market, all of Dawson-Bryant’s graduates shared mixed emotions of excitement, joy, relief, and a little fear and sadness as they said good bye to their school days.

Parade celebrates communities, honors those who paid the ultimate price Memorial Day is about remembering those who gave the ultimate... read more